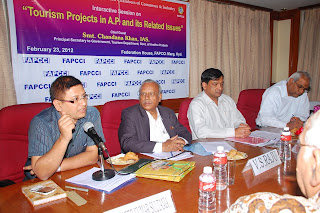 Sri V.S. Raju, President, FAPCCI stated that tourism industry is one of the major segments of the Indian economy and is a major contributor to foreign exchange earnings providing employment to millions directly and indirectly and acts as a vehicle for infrastructure development. Andhra Pradesh is witnessing increase in the number of domestic and international tourists in the last few years, and it ranks as No.1 State in the Country for domestic tourism and is within the top 10 for international tourism. He congratulated the Tourism Department for making these efforts. He brought to their notice that there are complaints that clearance of the tourism projects are being delayed and requested for speed up the clearance of the projects under single window system and suggested to have a time-frame for the same.

Business tourism, Medical tourism, rural tourism, pilgrim tourism, adventure tourism, and sustainable tourism are some of the new products devised for changing demand, he said. The State has identified Medical tourism as immediate emerging sector for its promotion, especially to develop Hyderabad as medical Tourism Hub. FAPCCI in collaboration with the Tourism Department has organized a “Hyderabad as an International Hub for Medical Tourism – A road Map” in May, 2011 wherein the proposal for setting up the Hyderabad Medical Tourism Society was welcomed by all the stakeholders. It is understood that the Department is contemplating to create the Society, which will be an instrumental agency in promoting Hyderabad as an International Hub and requested for inclusion of FAPCCI as facilitator to take forward this important initiative.

Sri Ravindra Modi, Chairman, Tourism Committee, FAPCCI said that efforts should be made to promote film tourism in A.P. by setting up a film commission at the State level. He also requested for effective single window clearance for tourism projects for better growth of the sector. Also suggested forconducting short term duration training programmers on PPP basis for improving the skills and employability of local people and promote entrepreneurship in the tourism and its related sectors. FAPCCI would like to offer its services to collaborate with Department in organizing and implementing these programmers.

He mentioned that FAPCCI is planning to organize an event on the growth and potentialities of the Film Industry with the consultation of all the stakeholders and requested the Department to support and collaborate with FAPCCI in organizing the event. 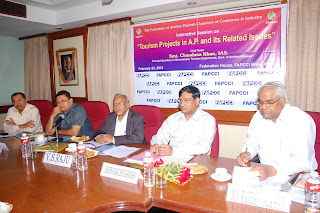 Sri Sandeep Kumar Sultania, IAS., Managing Director, A.P.Tourism Development Corporation (APTDC) informed that the APTDC will soon offer attractive packages for tourists from across the country for an all-inclusive, affordable and comfortable Tirumala-Tirupati visit. At present, APTDC has a joint initiative with Jet Airways and offers packaged tours to Tirumala-Tirupati, ex-Hyderabad at Rs. 9,250 per person, including accommodation, food and travel expenses. Many more such packages were on the anvil, he said.

He said that with focus on rural, eco and film tourism, Government intended to aggressively adopt the public private partnership mode to showcase Andhra Pradesh as an attractive tourism destination. He called for greater participation by private operators in promoting in-bound tourists, especially international arrivals. Every now and then, APTDC keep holding road shows, but the fact remains that word-of-mouth publicity is much more effective. And so we must pay attention to this aspect even while escorting tourists from here to elsewhere and ensure that the word is spread wherever we go.

The APTDC also plans to add another two-three tourism training centres in the State, including one around the Kawal Wildlife Sanctuary (Medak) and Dindi reservoir (Mahabubnagar). There is a growing demand for these places among tourists and APTDC hope to provide the required facilities to them through their projects. 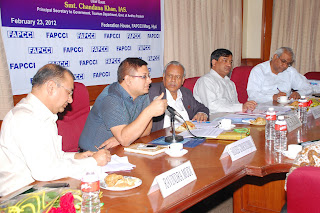 Sri Sabyasachi Ghosh, IAS., Commissioner of Tourism, Govt. of Andhra Pradesh stated that the potential of tourism to generate employment is matched by no other sector. He said that the Tourism Department is looking for more public-private partnership for development of tourist spots. Another unique service called Hop-on and Hop-off would be launched in the city within a month. Under the service, APTDC will provide six to seven buses to 13 tourist spots in the city.

Responding to a suggestion from the participants, he said that the annual Travel and Tourism Fair is open for FAPCCI and its members to participate. All that is needed is greater coordination with Government agencies, he said. The objective is to make tourist facilities affordable, comfortable, clean, neat and safe for the ‘aam aadmi' (common man), the middle class and the upper classes. The upper class tourist anyway pays for the best,” he said.

One of the members, stated that over the year, nature and adventure travel has emerged as one of the fastest-growing segments of the industry. Much of this growth is taking place in biodiversity hotspots, areas harboring many species unique to that region, where tourism represents both opportunities for and threats to biodiversity conservation. Tourism and biodiversity are mutually dependent, hence there is a need to promote biodiversity. There was also a suggestion for inclusion of details of tourist spots promoted by the private developers and private tour operators in the booklet published by the Tourism Department.

The Officials informed that the Department will promote biodiversity and is also planning to bring out a Publication wherein the details of private tourist spots as well as tour operators will be published and circulated for wide publicity.