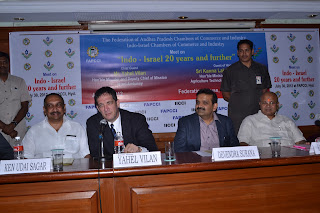 Hyderabad: A High level Israeli delegation led by Minister and Deputy Chief of Mission Yahel Vilan of Israel Embassy in India, spokesperson David Goldfarb came here on a two day visit of the city. They have interacted with the State Government on various areas of interests that AP and Israel can collaborate.
At a meeting held at the Federation of Andhra Pradesh Chambers of Commerce and Industry and the Indo Israel Chamber, Agriculture Minister Kanna Laxminarayana requested the Israel Government to include Andhra Pradesh as one of the States from India to be part of Israel Action Plan. He also explained about the rich experiences he had during his visit to the Agritech held in Israel.

Replying Yahel Vilan said that he and other members of the delegation would initiate steps to include AP in the action Plan. He had recalled the rich and timeless values that both India and Israel share from the times immemorial. He also spoke on the common interests and challenges such as advancements in agriculture and the constant terror threats being experienced by both the countries. He also spoke about how both the nations have the similar security challenges. He said that the 20 years of the mutual friendship between the two countries would further progress in the years to come.

In his presidential remarks, FAPCCI President Devendra Surana said there were several areas in which both the nations can cooperate. He said both Israelis and Indian get well and share several common interests. In his welcome address FAPPCCI Secretary General MV Rajeshwar Rao introduced the profiles of the dignitaries.