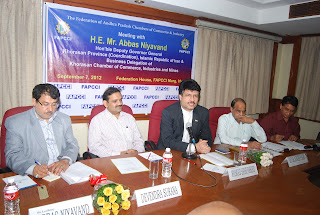 Addressing the members of FAPCCI, Hon’ble Deputy Governor General, Khorasan Province, Islamic Republic of Iran, H.E. Mr.Abbas Niyavand suggested for taking up with the Government for a direct flight from Hyderabad to Iran, for further increasing the trade between the two countries.  He also suggested for creation of a group to have exchange programs, for mutual benefit.  He also suggested for continuing the Iran Help Desk at FAPCCI and similar Desk can be started at Chamber of Commerce in Iran. 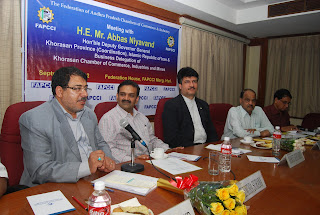 Khorasan being situated in the East of Iran, is attracting large number of tourists.  It has 6500 industries, and nearly 95% of them are from private sector.  The province's economy is based on agriculture (grains, beet, saffron, cotton and fruits), animal husbandry, light and heavy industry and rich mineral resources including natural gas.  The Khorasan Province has Special Council for regular interaction between the Govt. and Business, to sort out the issues.  There are tremendous opportunities in the areas of infrastructure, cement, mineral and iron ores, communication and information technology, etc. 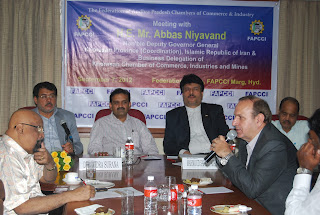 Consul General of Islamic Republic of Iran, H. E. Mr. Mahmoud Safari Farkhud stated that with a view to enhance business relations, the Iran Help Desk has been set up in FAPCCI and the Consulate is also extending visa facility to its members.  The Consulate has also extended an invitation to the industrialists to visit Bushehr province, to explore business opportunities.  Iran has 20 billion dollars trade with the world, out of which 15 billion is with India.

Earlier, Mr. Devendra Surana, President, FAPCCI stated that with a view to further leverage the potential of India-Iran synergies, FAPCCI is also planning to launch Chamber of Commerce for Iran Trade Promotion.   FAPCCI is working very closely with the Consulate General of Islamic Republic of Iran, Hyderabad, to promote the trade between the two countries by organizing interaction meetings with the business delegations on a regular basis. FAPCCI business delegations that visited Iran have entered into business contacts with their counterparts, he said.