FAPCCI requesting the Govt. to remove VAT on diesel 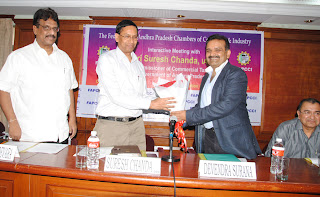 Mr. Devendra Surana, President, FAPCCI requested the Chief Minister and Government to remove the VAT on diesel, to strengthen the industrial sector in Andhra Pradesh. Because of uncertainty in the State and power problem, industry and commerce is suffering a lot- he said.

Mr. Devendra Surana in his welcome address stated that the Commissioner is very simple and very straight forward; he gives an immediate clarifications or guidance to us through mail. Commercial Taxes contributes more than 65% to the State Revenues. The department endeavors to transform into an enterprise friendly entity by introducing e-Registration, e-TP, e-Returns, e-Payments, e-Waybills and so on. And he also stated that we as the chambers look forward for implementation of GST Mr. Surana said.

Mr Suresh Chanda, IAS., Commissioner of Commercial Taxes, Government of Andhra Pradesh in his address stated that it is always good to have interactions between trade bodies and Department. He informed that when once the dealer is filing returns through online, there is no necessity of paper filing. With regard to filing of Profession tax returns before 10th of succeeding month, he stated that he will recommend to the government for 15th. He said that the ordinance on textiles is waiting for the signature of the Hon’ble Governor of AP on 1% tax issue.

He informed that the department has taken many simplification measures like efiling of returns, e-Way bills and streamlining the Check Post etc. He has clarified many queries raised by members of FAPCCI.

Mr. Ravindra Modi, Chairman – Trade & Commerce Committee in his introductory remarks appealed to the Commissioner, that one of the representatives of FAPCCI may be considered in the Advance Ruling Authority for better understanding as in the case of State Level Committee (SLC) for industrial incentives.

He also stated, that FAPCCI is willing to conduct an awareness programmes along with Commercial Taxes Department at district level on a regular basis for better compliance of tax laws, minimizing disputes, sorting out the e-filing problems and other administrative issues.
Posted by Venkat at Thursday, October 04, 2012