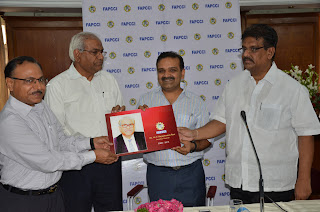 The Federation of Andhra Pradesh Chambers of commerce and Industry (FAPCCI) honored Sri M.V. Rajeshwara Rao, Secretary General, FAPCCI at a Farewell meeting organized on May 02, 2013. 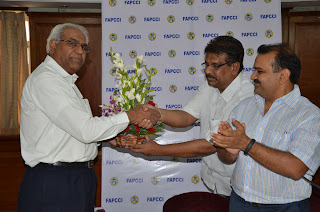 Mr. Devendra Surana, President, FAPCCI in his address lauded the services of Sri M.V. Rajeshwara Rao as Secretary General.  He said that the   problems of the industry and trade were taken care with utmost commitment, especially issues relating to power sector.  President said   that Sri Rajeshwara Rao has put tremendous efforts in highlighting the FAPCCI’s opinion   at all the forums and strived to improve the goodwill of FAPCCI. 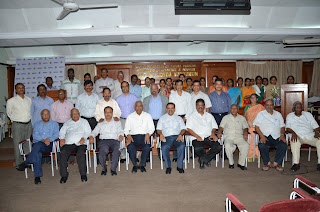 In his address Sri Rajeshwa Rao thanked the president, Senior Vice President and Vice President for the good words spoken about him. He thanked each and every member of FAPCCI for their support and patience that has enabled him to work with commitment   made it possible to carry out the responsibilities and discharging the duties. He said that it was a privilege serving the FAPCCI and working with the senior business people of the State of Andhra Pradesh. He said he would cherish the memories of FAPCCI and wished the FAPCCI to reach greater heights.

He was honored by the president, past Presidents and managing Committee members and staff of FAPCCI.