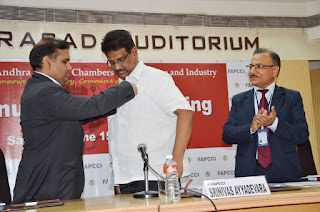 Sri Srinivas Ayyadevara, a renowned Chartered Accountant by profession and specialist in Taxation and Corporate Law unanimously elected as President of The Federation of Andhra Pradesh Chambers of Commerce and Industry (FAPCCI) and Sri Shiv Kumar Rungta is elected as Senior Vice president for the year of 2013-14 at its 96thAnnual General Meeting held on June 15, 2013, at Federation House, Red Hills, Hyderabad.

Sri Srinivas Ayyadevara, is a Chartered Accountant by profession and specialist in Taxation and Corporate Law, was unanimously elected as President of FAPCCI for 2013-2014 at its 96th Annual Managing Committee Meeting held on June 15, 2013. 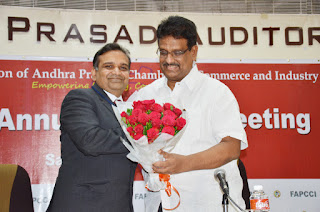 He is a advisor to several Companies on matters of Taxation. He practices on the appellate side of taxations. He was a member of the Syllabus Revision Committee for Nizam College and Osmania University for B. Com and M.Com.

He has been associated with FAPCCI for more than a decade and became Member of the Managing Committee, and was Chairman of Tourism, Direct Taxations & International Trade Relations Committee of FAPCCI. He was Vice-President of FAPCCI for the year 2011-2012 and Senior Vice President for the year 2012-2013. 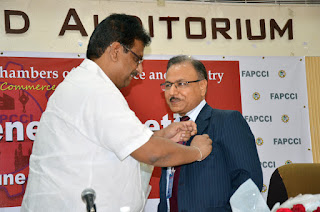 He was associated with FAPCCI for more than 10 years as Managing Committee Member. He was Chairman of Banking and Insurance, Membership, Foreign Trade, Information Technology & Biotechnology Committee and a member of Selection and Budget Committee. He was Vice-President of FAPCCI for the year 2012-2013.

He is the Chairman of AP Plywood, Laminate and Glass Dealers Welfare Association, since 2008-09 and also current President of Agarwal Samaj, Cyberabad. 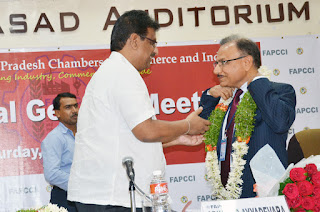 After completing his studies, he joined as Project Manager in a textile industry in Ahmadabad for two years, and subsequently worked as Marketing Manager in Khaitan fans, Kolkatta. He held senior positions in Pan African Paper Mills E.A. Ltd at Kenya and Nigerian Paper Mills Ltd at Lagos and worked there for four years.  He represented the Kenya Government as a part of the Trade Delegation of Kenya Chamber of Commerce and Industry to various countries in Africa. He has travelled extensively in East and West African Countries.


He plays Badminton and table tennis and was captain of Badminton team in college and IIM, Ahmadabad.
Posted by Venkat at Saturday, June 15, 2013