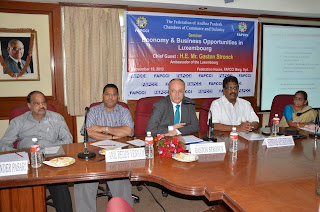 His Excellency Mr. Gaston Stronck, Ambassador of the Luxembourg was the chief guest for this occasion. He made a detailed presentation on 5 reasons to be in Luxemburg. 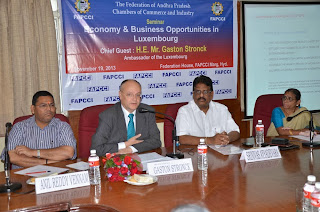 Sri Srinivas Ayyadevara, President, FAPCCI stated that the Andhra Pradesh is one of the fastest growing economies in India and became one of the hottest investment destinations among the various investment options in the fast growing emerging economies. The State is ranked 2nd in the country in attracting investments. In a World Bank Report, Hyderabad is ranked second easily accessible city in India for doing business.

His Excellency Mr. Gaston Stronck, Ambassador of the Luxembourg stated that the Luxemburg have a highly strategic position within the European market. A stable socio-political environment, favorable legal and regulatory framework, supportive administration, highly qualified service provider have proved that the Luxembourg is the ideal platform for coordinating and managing your European business activities.

Mr. Gaston Stronck said that the Luxembourg is ranked second richest country in the world as per capita GDP on purchasing-power parity (PPP). It has a wide range of business sectors, particularly steel, chemical, plastics and synthetic materials, textiles, engineering, mechanical construction, industrial machinery, processing of ferrous and non-ferrous metals, car industry, precision instruments, electronic supplies and glass production. Luxembourg is the world's second largest investment fund center (after the United States), the most important private banking center in the Euro zone and a prominent place for listing bonds.

FDI flows from Luxembourg to India between April 2000 and April 2013 are about US$ 479.02 making it the 25th most important investor in India and the 11th largest within the EU. The sectors that attracted maximum investments from Luxembourg include trading, computer software & hardware, services sector, agricultural machinery and chemicals.

The economic liberalization and rising incomes have stimulated rapid trade growth with European countries and significantly increase in trade relations between India and Luxembourg.  As you are aware, India’s diverse economy with a current growth provides increasing opportunities for Luxembourg companies to explore business opportunities and enhance trade between the two countries Mr. Gaston Stronck said.
Posted by Venkat at Tuesday, November 19, 2013