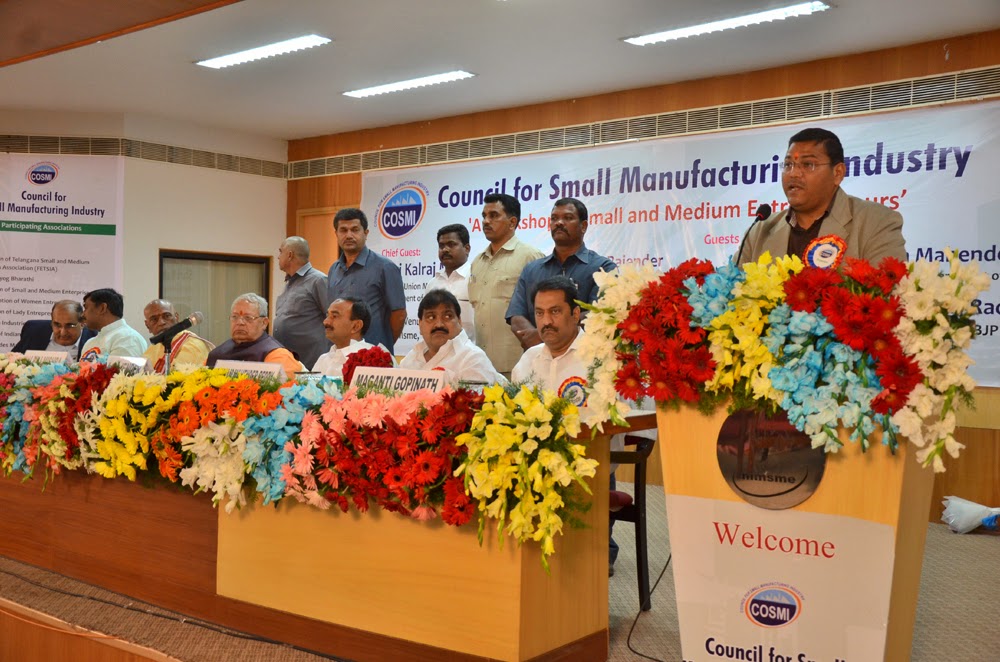 Micro, Small and Medium Enterprises (MSMEs) are widely considered as ‘Engines of Economic Growth’. They are credited with creating jobs, delivering innovation, and raising productivity. But MSMEs in India are not currently meeting that promise. The performance of MSME sector is not very encouraging and upto their potential because of many hurdles and problems.

The first and foremost is to change the definition of MSMEs as defined in 2006. Keeping in view the vast changes that occurred in business environment globally, the investment limit on capital and equipment for categorization of micro, small and medium enterprises need to be enhanced.

FAPCCI suggested considering doubling of investment limit for micro, small and medium enterprises (both manufacturing and services) from the existing limit.

Sri Anil Reddy also said that the limit for excise duty exemption needs to be enhanced from Rs. 1.5 crs to a minimum of Rs. 5 crs and there should not be any threshold limit to forego the exemption next year. Limit should not be cancelled if the MSME unit crosses the threshold limit. FAPCCI requested the current government to revert the excise duty on products from this sector to the previous rate of 8%.

Other major obstacle for MSME growth is the lack of sufficient funds and pointed out that the monetary policy of RBI is also not helping the cause of MSMEs. In the recent past RBI has increased rate of interest numerous times to contain inflation but neither the inflation is contained nor the industrial sector able to get the finances, he said.

It is suggested that the rate of interest for MSMEs should be reduced to 8% per annum to make the cost of credit affordable.

In the recent past growing number of NPAs became the concern of entrepreneurs and bankers and the industry is disgruntled that there is no system in place to assess whether an NPA is due to non-performance or mismanagement or operational difficulties. MSMEs should be given more time to get stabilized. "Due diligence” is to be followed before declaring an account as NPA and if the entrepreneur is facing genuine operational problems then the loan is to be rescheduled.

It is also suggested that Offset Policy on the lines of Defence Offset Policy should be introduced in all capital equipment industries which will boost the demand for products of MSMEs. There is immediate need to revamp the Labour Laws as there are   44 federal labor acts — the oldest of which dates back to 1923, when the British ruled the subcontinent — and more than 150 state laws govern how workers can be hired and fired, their safety and compensation.

The plethora of labour laws and the various implementation authorities made the system rigid, face an army of inspectors and harassment and made to maintain large number of registers and submit returns. The entire gamut of laws, regulations need to be simplified.

Power is the key input for industrial growth. Availability of power or otherwise affects the growth of industrial sector. MSMEs major input cost is the power cost and hence special focus need to be given to power supply to this sector. ‘National Policy on Power’ needs to be brought out to ensure continuous power to MSME sector at a lower price.

DISCOMs need to provide dedicated feeders and supply uninterrupted and quality power to the MSMEs particularly those located in industrial clusters, parks, clusters etc.
Posted by Venkat at Tuesday, August 26, 2014