In particularly Mr. Geoferry Conaghan explained the Victoria state business statistics and Business opportunities in various sectors. He explained that the Victoria state have a 25% GDP percentage in national development and 33% GDA of annual. 27 million passengers are travelling in Australian airlines and particularly Victorian state playing a vital role. Victoria is another brotherhood state for Indians and Victoria offering many facilities to the businessmen and entrepreneurs. 15 Indian IT companies are operating a key role in Australia and particularly 9 of them from Victoria. Victoria government offered citizenship and nationality to the 2 lakh Indians. 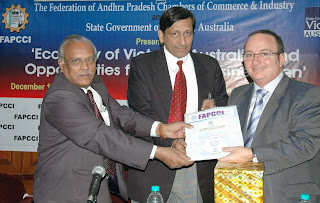 Mr. Shekhar Agarwal said in his welcome address that the Victoria accounts for only 3% of Australia’s land mass, yet is responsible for 24% of Australia’s economic activity. Its economy is bigger than that of Singapore, Hong Kong and New Zealand. Victoria is one of the strongest and most resilient economies in the world that enjoys AAA credit ratings from both Standard and Poor’s and Moody’s and has done consistently for ten years.

According to World Bank group releases on ‘Doing Business in South Asia’ 2007, India is the top performer in the region, and Hyderabad has the country’s most business friendly regulations. Andhra Pradesh, being ranked first in the manufacturing of bulk drugs and third in formulations in the country, accounts for 40 per cent of the total Indian bulk drug production and 50 per cent of the bulk drug exports.

In 2009, Andhra Pradesh registered an export turnover of over Rs.32,000 crore, representing an annual growth of 25%, and contributing a significant 15% to the national’s overall IT exports. The State has the highest number of approved Special Economic Zones. Hyderabad is also aggressively being promoted as a destination for meetings, conferences, exhibitions. All this combines to help the city to attract the highest number of tourists every year.

Mr. Hari Haran said that Indian companies have created more than 2,100 jobs in Victoria through investment of over $110 million. The Indian ICT industry is well represented through the presence of leading companies such as Wipro, Infosys and TCS. In 2009, there were more than 190,000 international student enrolments in Victoria, making international education our most valuable export. More than 56,000 of these students came from India.

Mr. V.S. Raju honored the guests with Memento and offered vote of thanks.

Mr. M.V. Rajeshwara Rao welcomed the guests and felt that the business opportunity program had a positive response from the business sector.