TDS accounted for 40% of the total revenue of Direct Taxes 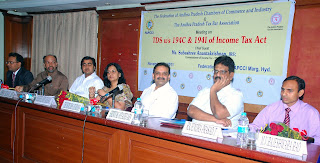 The Federation of Andhra Pradesh Chambers of Commerce and Industry (FAPCCI) in association with The Andhra Pradesh Tax Bar Association organized a meeting on “TDS under Income Tax Act” (TDS under Sections 194c and 194i of Income Tax Act) on 26th November 2011 at Federation House, Red Hills, Hyderabad to understand the complexities of section 194C and 194I of the Income Tax Act. Though the definition of the work is inclusive in section 194C and definition of rent in 194I is exhaustive, it is often confusing in many contracts and agreements, whether it is covered by 194C or 194I or 194J. 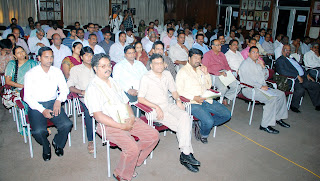 Ms. Subashree Anantakrishnan, IRS., Commissioner of Income Tax-TDS, in her inaugural address stated that TDS has gained importance in recent years and has become a major tool of tax collection. She informed that, TDS accounted for 40% of the total revenue of Direct Taxes. The Department is totally computerized and all the information is available with us. Therefore, absolutely essential that all the stakeholders understand their obligations and ensure that at their respective end, accuracy is maintained in feeding the relevant data in the system. It is the responsible of the deductor to ensure accuracy and completeness of data relating to PAN/TAN and filing of returns in a stipulated time which enables the deductee to claim the credit. She expressed that this type of meetings are useful to interact with assessees and understand the difficulties/compliance faced by them.

Mr. Devendra Surana, Senior Vice President, FAPCCI, in his welcome address stated that we are facing problems from all areas whether it is the international situation of Europe, Greece, Italy and everything seems to be inundating us with all sorting news, we understanding that US is lot of trouble particularly with zero growth. In India, we have very high interest rates, which is indeed making difficult to industrial growth. Coming to the AP we had a situation which has unparallel for the last 14 to 16 months our economy seems to have be paralyzed with various political situations in the state. Now we are facing un-residential power cut problems. In this present scenario our industries are not getting continues power for at least three days or more. 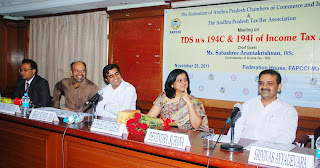 Mr Abhay Kumar Jain, Chairman- Direct Taxes Committee, FAPCCI in his introductory remarks, stated that the endeavor of tax department to introduce paperless TDS Certificates are yet to achieve its desired goal, as there are mismatch of data between TDS Certificates issued by Deductors, TDS statements uploaded on TIN system and bank payment details, PAN Nos. of the deductees. In every mismatch case, PAN Wise deductee ledger does not show full TDS credits. In all such cases deductees are most sufferers, where the default lies in majority of the cases either in the hands of deductors or in the hands of bankers or in the TIN system itself.

He suggested to design TDS Challan in such a manner, that it should contain PAN numbers of Deductees and it must uploaded at the time of payment of challan so that it must be credited at the moment they pay the challan, so the deductee does not has to wait till deductors file proper returns. It will remove existing complete chaos in the system.

The Commissioner of Income Tax and the team of officers clarified number of doubts raised by members.

Technical Session was concluded with Vote of Thanks by Mr. S.S. Satyanarayana, Secretary- The Andhra Pradesh Tax Bar Association.

The Inaugural Session was concluded with Vote of Thanks by Mr. Srinivas Ayyadevara, Vice President, FAPCCI.