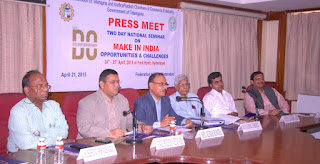 The Federation of Telangana and Andhra Pradesh Chamber of Commerce and Industries (FTAPCCI) is organising a two-day national seminar on Make in India- Opportunities and Challenges, on 24th and 25th April, 2015, at Park Hyatt, Hyderabad. The event is supported by Government of Telangana.

The purpose of the programme is to discuss the issues and challenges in making India, one of the major manufacturing hubs in the world. When we look at the India’s growth pattern, we see that the share of agriculture sector in the GDP declined at a fast pace to 17.9% (at 2004-05 series) where as the share of services sectors increased to 56%. The share of industries sector remained almost stagnant at 26% for two decades now. This pattern of growth is not sustainable in the long-run, especially for a country like India, where we have huge amounts of human and natural resources.

In the recent past the decline of growth has been particularly sharp in manufacturing which is dropped from about 7% in 2011 to minus 1.2% in 2013. The fall in Manufacturing’s elasticity is a matter of great concern which has fallen from 0.76 in the first period to minus 0.31 in the second. India needs to create 30 million additional jobs between 2010-2015 but could create only around 3 million jobs in the period. It is estimated that over 5 million jobs per year from 2015 to 2020 need to be created to provide jobs for working population. With stagnant share in GDP and falling manufacturing elasticity and falling share of agriculture in the GDP creating 5 million additional jobs a year is next to impossible task.

In this scenario, the Hon’ble Prime Minister’s initiative of “Make in India” campaign gives a ray of hope and the initiatives taken by the Government of India on various fronts to improve ease of doing business are attracting investments from national and international investors.

Now “India is on the brink of major change and it is up to us, to make best use of it to emerge having made the best of it. We need to understand the obstacles that stand in our way and chart our path of progress accordingly. That is precisely the agenda of the Discover Opportunity seminar,” explains Mr. Shiv Kumar Rungta, President, FTAPCCI.

The two day brainstorming session will be attended by ministers, senior officials, industrialists, entrepreneurs, scientists, economists and influencers. The subjects of discussion range from Policy perspective on Make in India, World economic environment, Free Trade Agreements, Indigenisation and opportunities for MSMEs, Licensing and sanctions, and Increasing manufacturing efficiency to sector wise opportunities in various industrial sectors such as food processing, textiles, IT and ITES, Pharma and bulk drugs etc.

The programme, through a series of discussions, knowledge sessions and presentations will throw light on various policies and regulatory issues, and provide an understanding of growth patterns and emerging trends in global business. It will also facilitate interaction and networking with policy makes, regulators, government officials, suppliers, manufacturer and other stake holders. We expect this program to attract more than 300 participants from various industries, academia and the government.
Posted by Venkat at Monday, June 15, 2015