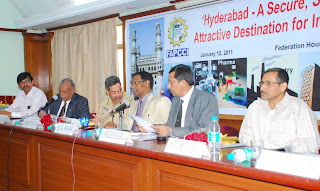 Mr. Shekhar Agarwal, President, FAPCCI, explained the security problems of the industry and trade that - FAPCCI has been making efforts to seek some salvation from the adverse effects of such insecure feeling among the stakeholders.

Recently we have sought the support of the Task force from the A.P Police Department, which has formed a group in the interest and protection of congenial Industrial atmosphere in the state The investments made in these Industries amounts to National wealth and any adverse reactions will not only be a setback, but damage, the course of development.

Various Associations along with the members of FAPCCI and Industry fraternity have converged, conferred, and congregated and chalked out a few modalities to contain this fervor and fear, with the Nodal Task Force of Industrial safety. In fact several measures are taken to set up a fool proof alert system to and from industrial areas, and immediate remedial action taken to protect the complainants. We therefore have taken upon us the mantle of setting aside these fears with the help of the Police Department. 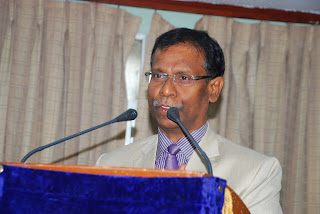 Mr. Hari Govind Prasad said in his chairman speech is that the Work place has to be a place of worship, a sanctuary for the people who depend on it for a living. People invest in assets through hard work and innumerable risks. So, the State’s development and stability is also dependent on it. This programme is mainly to ensure this belief and prevail on industry stakeholders to be alert and ever ready. This is also a kind of CONFIDENCE BUILDING MEASURE by FAPCCI to all the stakeholders and members who are an integral part of Hyderabad. We should constantly persevere to preserve our heritage and the Police are our PROTECTORS and Law Enforcers mainly to ensure safety of our City and its citizens.

Mr. Sntosh Mehra, compared the city of Hyderabad to “Tale of Two Cities” (fiction) and observed that in his experience Hyderabad was the most peaceful city in the entire world. He talked about three ‘P’s that is Peace, Progress and prosperity, can be easily achieved with help of Police. He hoped that the integrated security system is formulated by apex bodies like FAPCCI.

Mr. Dwaraka Tirumala Rao, talked about the commitment of the police towards maintaining a high profile security system in Cyberabad. He said the Cyberabad Security Council has been initiated to maintain a safe city.

Mr. A.K. Khan assured that police officials have the utmost sincerity and conviction to improve the quality of the people of Hyderabad and that any kind of untoward incident is a gift from democratic setup, which gives space for dissent. So taking the ground situation people were advised to take situations in their stride and put the services of the Police Departments to good use.