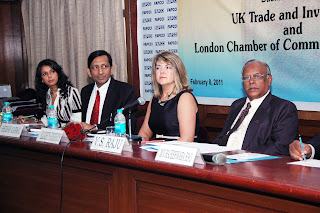 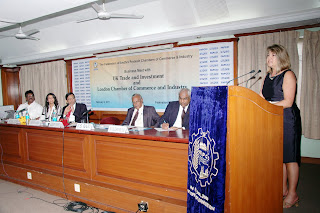 Ms. Ruma Deb invited investments to London and she said that the – London Chamber of commerce provides over 1,20,000 export and import documents each year including certificates of origin and import certificates, thereby facilitating trade between the UK and the rest of world. The London is the ideal business location it has five international airports, the largest stock exchange in the world, over 550 banks.

Ms. Deb also said that the London chamber is offering translation services for non UK based investors in technical, commercial and legal documentation areas and software translation, helping companies to communicate with their customers. The London chamber invites investments in professional, legal, architectural and retail sectors.

Ms. Elizabeth Fehnrich explained that the UK Trade & Investment is the government department thet helps UK based companies succeed in the global economy and UKTE also helps overseas companies bring their high quality investment to the UK’s dynamic economy – an acknowledged as Europe’s best place from where could succeed in global business. 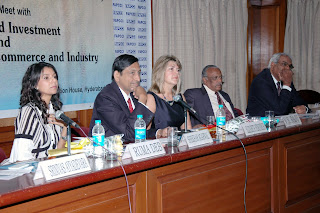 Mr. Shekhar Agarwal explained the States potential in trade and investment and business opportunities in Andhra Pradesh in his welcome address. He said that Andhra Pradesh is one of the fastest growing economies in world and became one of the hottest investment destinations among the various investment options in the fast growing emerging economies. The State is Ranked 2nd in the country in attracting investments. In a recent World Bank Report, Hyderabad is ranked second easily accessible city in India for doing business. He offered foreign investors, foreign institutional investors, venture capitalists, and portfolio managers to leverage vast pool of natural, human and intellectual resources of Andhra Pradesh.

The booming Andhra Pradesh economy has a lot of opportunities and great potential exists for increasing trade and investment in the areas of Energy, Higher and Vocational Education. Biotechnology, Healthcare, Information Technology and Food Processing, among other sectors such as manufacturing, automobiles and infrastructure to achieve the target of taking the bilateral trade to US $ 24 billion by the year 2015.

Mr. Srinivas Ayyadevara said about the bilateral trade and investments relations. He said in his address that the UK is the most popular business destination in Europe for Indian companies. 700 out of the 1200 Indian firms in the EU operate from the UK. The total trade between India and UK stood at $12.5 billion in 2008-2009. The latest figure says in the year 2009-2010 the trade value was US $ 10.6 billion. India’s ambition is to double its bilateral trade with UK to $24 billion in the next five years.

India is becoming major investor in UK. More than 180 Indian companies have invested in IT sector in UK. Indian companies employ approximately 90,000 people in UK. UK being the world’s sixth largest manufacturer, a hub for science and innovation and gateway to EU will continue to remain an attractive place to do business for Indian companies.

UK and India are leaders in ensuring that knowledge sectors drive inclusive economic growth in the 21st century. There is a need for increasing close partnership across all stages of learning, from support to primary school children, between UK and Indian Universities, to research into the most advanced technologies.

Mr. V.S. Raju honored the guests and offered vote of thanks.