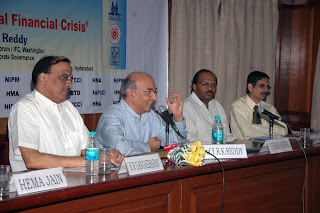 Mr. Shekhar Agarwal, President, FAPCCI welcomed member guests and Prof Y.R. K. Reddy. He was optimistic about the financial stability in India and the pursuance of prudential policies preventing financial institutions from excessive risk taking and protected the capital market from becoming extremely turbulent and volatile.

Prof Y.R.K. Reddy, Consultant Global Corporate Forum, IFC, Washington, addressed the members of FAPCCI, HMA, ISTD and NIPM. He spoke on “Social Impact on Financial Crisis”. Prof Reddy commended good things enumerated by our Prime Minister and explained various factors leading to the impact of global financial crisis, which arose more out of social indicators rather than financial. While the current financial crisis and global economic downturn did not originate in Asia, none the less Asian countries and economies and their financial markets felt its impact. These are likely to be deepened substantially over the coming years. The most obvious areas of impact have been exports and equity markets which have declined sharply across the region. But the stresses in currency and credit markets have emerged well and domestic demand has softened. 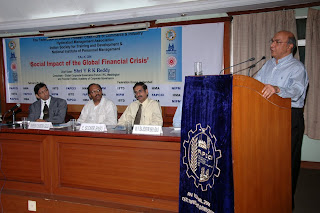 The sensitivity has been heightened by the export led growth strategies of many countries. Social economic impacts of this crisis have been felt on Sub-National, Regional Economies, Income distribution, poverty, education, health and empowerment of women. An economic and financial crisis can frustrate development. Though many countries recover quickly they cannot achieve or returned to the same growth path. A crisis of this sort has long term developmental implications; measures need to be adopted to mitigate the impact of vulnerable.

Prof. Reddy added that the cause of the crisis was not sub-prime mortgage lending, it was just a trigger, but failed financial industries from investors around the world. There was tremendous trading by banks than regular banking; they made excessive revenue rather than corporate profit. Most of the financial activities were socially useless and did not contribute to the development or growth.

India circumvented this global crisis by sticking to pure banking policies rather than indulge in heavy trading. The social financial measures were intact and helped stability. If any impact was felt in India, it was the impact of the cost of inward remittances from all over the globe; transmission mechanism and global pricing created the setback, exports were terrible affected as there was a phenomenal decline. FDI further decline by 40% as the affected countries has no recourse but to draw from their overseas investments. Markets became volatile, welfare and social measures in education, youth employment were affected. India ranked 67th on Nomura’s Food Vulnerability Index. Similarly the Middle East countries suffered tremendously; there was burgeoning youth unemployment which was torturous and painful. Repatriations of immigrants added to the woes of employment opportunity. 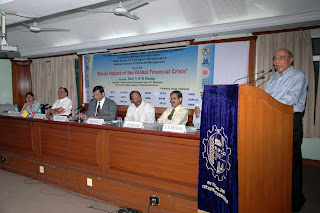 There was half a decade of lost human potential and lost human capital, human indicators went haywire and could not be ignited. He ended by saying “Corporate Social Responsibility is not just ‘Budgetary Allocations’ but ought to be an active participant in social upliftment.

Mr. Naresh Gelli, President, HMA, offered his remarks on the lecture and hoped that, speedy alternative remedial measures should be able to limit the extensive damages due to the crisis. India should look inwards for its sustainable growth. Achieving 9% growth rate is not impossible.

Vote of thanks was proposed by Ms. Hema Jain, Secretary, HMA.