Effect of “Samme” and Power Holidays on Industry 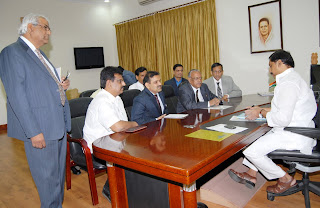 The Industry has already lost Rs. 8,750 crore in the last 30 days of “sakala janula samme”. This loss accounts for 2.9 percent of industry’s annual production and pulls down the State GDP by 0.72 percent – a major loss to the State. Further, the condition of the industry is most critical and grave and it is deteriorating day by day. It cannot wait any more and the prime need is 100 percent power supply, else it will collapse.

This has serious implications for its survival and sustainability. Many MSME units have become sick and many are on the verge of sickness. Even medium and large units are running into financial problems. There are many other grave implications that the industry is suffering from. They are:

2. These job losses lead to social unrest and economic distress in the State.

3. Customers have lost confidence as their supplies are not delivered on time.

4. As a consequence, it is becoming very difficult the future orders from the customers.

5. This is a serious matter. It leads to stagnation or even negative industrial growth, with attendant ill effects, such as drop in tax revenues affecting the State’s development programs and welfare schemes.

6. Industrial sickness in the State is rapidly increasing.

7. Banks suffer and end up in large number of NPAs.

8. Investor’s confidence is also shaken. New investments and expansions will be either cancelled or delayed.

The strikes, rasta-rokos and power cuts are compounding the problems of the industry, which is already being impacted by the slowdown in the world economy due mainly to sovereign debt problems faced by Europe and USA.

Another major concern to the State is that the Delhi-Mumbai-Industrial-Zone and Gujarat are acting as major magnets attracting and sucking in huge investments from all across the country and from abroad.

Besides these challenges, the share of manufacturing sector in Andhra Pradesh is around 11 percent as against country’s share of 16 percent of GDP. The GOI has set a target to increase it to 25 percent. With all these problems, our State will have herculean problems to raise it to 25 percent and catch up with the rest of the country.

These are major concerns and challenges we are up against. We seek your support and positive action. The first thing we request the Hon’ble Chief Minister is to increase the power availability and ensure supply of 100 percent power to industry to gear it up to make up the losses incurred so far. Only will the power – 100 percent power – save the industry from collapse. Sir, it cannot wait any longer.

Lastly, as an immediate measure to mitigate the worst suffering the industry has been facing, we enclose a separate representation for your favorable consideration.