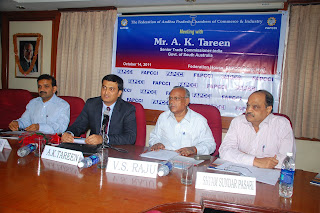 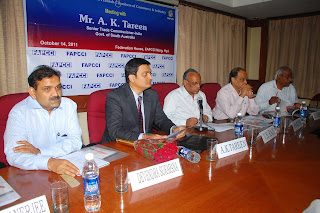 Mr. A.K. Tareen said that the South Australia was the sister friendly country for the Indians and 8th Most Liveable city in the world. He said that the innumerous possibilities and opportunities that lay ahead of the two nations in order to enhance bilateral trade relations. India is South Australia’s fourth largest export market. The South Australia was 11th most attractive destination worldwide for Mining sector and India has tremendous scope to enter into bilateral partnerships in this sector since mining is one of the strongest arenas as well. India could well turn into the biggest partner for mining.

Mr. V.S. Raju India and Australia have embarked upon talks to conclude an ambitious Comprehensive Economic Cooperation Agreement and the latest engagement resulted in an initiative being launched to develop two-way trade between the two nations and its success is expected to add over $40 billion to each economy by 2016. I am sure, with the frequent visits of Australian Officials and greater awareness about the Australian market, the target set would be definitely achieved.

So far, Indian companies have invested around $3 billion in Australia, dominated by coal. Recently, the GVK Group announced a deal to acquire Hancock Coal for $1.26 billion. It plans to invest an additional $6 billion to develop assets. Early this year, Lanco Infratech acquired assets of Griffin Coal in a $760-million deal. Australia has so far attracted a global investment of $83 billion in the resources sector alone, while the pipeline is at an estimated $430 billion. South Australia is one of the exciting investment and trade destinations for international developers requiring a strategically located business base in the Asia Pacific. South Australia’s economic performance in recent years has been strong. Its mining, defense, clean technology and education sectors are attracting international investment and attention, apart from its long-standing expertise in manufacturing, agriculture, wine and health services Mr. Raju said.