India’s Forex reserve is moving around US $311 bn

Mr. V. Shashi Koomar said that the exporting profession is highly essential for the Nation’s wealth by bringing foreign currency. Our Forex reserve is moving around $311 bn and is in reducing trend. We all know that our India’s export target for this financial year 2011-12 is US $ 313.bn, against the achievement of US $ 247 bn during last financial year. Till September 2011, we had reached the mark of exports US $ 160 bn with an increase of 52% growth over that of previous year. But, observing the global trade and various economical scenarios in the countries USA, European Union etc. the biggest markets for our export business, it is causing a great concern that this quantum growth may not exist in the months to come. The trade deficit is US $ 73.50 bn. It is believed that there is deceleration and growth registered in exports, gem and jewellery. The direction of exports are new markets such Africa, Latin America and Asia.

Mr. RJ Vaidyanathan said that the ‘Export Marketing: Procedure & Documentation’ is really a commendable in that sense starting from how to do export business, international trade/documents, Foreign Exchange Management Act, Inco terms, availing finance from banks both for pre and post shipment, availing credit insurance and other export related organizations like DGFT, EXIM Bank etc. 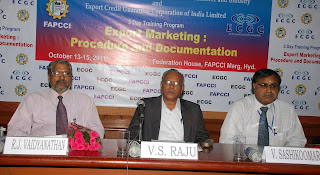 Mr. V.S. Raju said that the India's exports maintained their growth momentum in August, 2011, rising by 44.2 per cent year-on-year to 24.3 billion dollars despite the economic woes in traditional Western markets. Imports, too, grew by 41.8 per cent to 38.4 billion dollars in August, translating into a trade deficit of 14 billion dollars during the month. Gems and jewelry constitute the single largest export item, accounting for 16 percent of exports. India is also leading exporter of textile goods, engineering goods, chemicals, leather manufactures and services. India’s main export partners are European Union, United States, United Arab Emirates and China.

Mr. Raju also said that the Small and medium scale enterprises are the most significant contributor in the field of India's exports. There has been a prominent increase in the exports from the sectors viz. both traditional and non-traditional goods including jewelery, garments, leather, hand tools, engineering goods, software, etc. Also, the enterprises with good export performance have greater stability in the economy. But, there is still lot of problems in exporting the products by small and medium entrepreneurs to other regions/ countries/areas. They are not very familiar with the steps and formalities involved in exporting goods from India. They need to be made aware of all the steps involved in the process, such as, registration of exporters; selection of export market and buyers; receipt of enquiries, letter of intent, letter of credit, bill of lading, etc; insurance coverage; obtaining shipping order; certificate of origin; sending documents to importers; etc.

Mr. Shyam Sunder Pasari said that the 3-day training program on ‘Export Marketing: Procedure & Documentation’ is specially designed to provide an effective introduction to fresher’s and an insight into the latest trends to practitioners.

Though 44.2 % growth in exports in August, 2011 is remarkable but against the backdrop of over 81% growth in July, 2011, it would be termed as moderate. We may have to face further decline in export growth in third and fourth quarter, primarily due to recessionary trend in advanced economies, pulling down the overall export growth in current fiscal. It indicates that the pace of global recovery has been slowing down in 2011. Global GDP is expected to grow by 3.1 percent in 2011 following an increase of 3.9 per cent in 2010. The stimulus given by developed countries disappeared since middle of 2010, and now the fundamental weakness in the recovery process in developed economies is visible. It is high time that the Government should announce immediate reduction in interest rate for exports and interest subvention scheme for exporters along with PCFC (Packing Credit in Foreign Currency) loans for MSME segment, so that exporters can sustain the competitiveness Mr. Pasari said.

Mr. Hari Haran honored the guests with mementos and concluded the training programme with the vote of thanks.