The Steel and Ferro Alloys Industries are literally on the sick bed.  Their reserves and resources have been eroded, thanks to 40% to 60% power cuts over the last 16 months from September, 2011.  Their financial strength is so badly weakened that they are not in a position to pay the electricity bills of November, 2012, in which 35% to 50% of normal running bill is the component of FSA.  There is one bill in which the normal electricity bill is Rs. 70 lakhs whereas the FSA component amounts to Rs. 35 lakhs.  In another bill, the normal electricity bill is Rs. 4 crores whereas the FSA component constitutes as much as Rs. 1.41 lakhs.

Steel Industry is power intensive and the power constitutes 40% of the cost of production.  Owing to the power cuts in the last 16 months the production and sale of the steel industry have declined drastically.  The Industry was just maintaining the production and sale at the breakeven level where their revenues are equal to their expenses.  Thus, they do not have any surpluses to meet the additional billing of FSA component and that to large amounts varying from Rs. 35 lakhs to Rs. 1.5 - 2 cores.

It is against this weakened financial position of the steel industry; the industry has not made payments of the electricity bills of November, 2012, the last date of which was December 10, 2012.  Thus the industry in the throes of serious financial crisis and are at the threshold of closing down the entire industry unless some immediate remedial measures are initiated both by the Government and the industry. 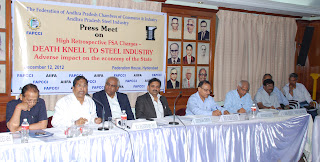 We would like to place before you the nature of Steel Industry and its importance in the State’s economy.

1.     The investment in the Steel Industry in the State is to the extent of Rs. 10,000 cores;
2.     It supports the downstream industries whose investment would be around Rs. 1,00,000 crore;
3.     Its direct employment is about 1,00,000
4.     The employment it supports in the downstream industry is to the tune of Rs. 8 lakhs to Rs. 10 lakhs.
5.     The Steel Industry contributes Rs. 1000 crores towards payment of electricity charges, Rs. 1500 crores towards Excise Duty and Rs. 500 cores towards VAT per annum.
6.     Once the industry is forced to close down on account of external conditions such as high FSA charges, low power supply or high quantum of power cuts, the adverse impact will be on the economy of the State, employment, etc.
7.     Steel Industry is a core industry and has multiplier effect on the economic growth of the State and the Country by a multiple of 6 and thereby it forms a major portion of the GSDP of the State though its production is only 2% of the overall industrial production and its effect is as much as 12% on the industrial production and a little over 3% on the GSDP of the State which is a very significant per cent in terms of a economic impact.
Posted by Venkat at Wednesday, December 12, 2012