The Federation of Andhra Pradesh Chambers of Commerce & Industry (FAPCCI) in association with the Consulate General and Promotion Center of Argentina in Mumbai and EXIM Bank of India Organized an Seminar on “Doing Business with Argentina: Trade, Tourism & Investment Opportunities” on December 17, 2012 at FAPCCI, Hyderabad. Mr. Tomas Ferrari, Consul General of Argentina was the chief guest for this occasion. 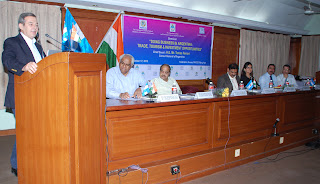 Addressing a Seminar His Excellency Tomas Ferrari, Consul General of Argentina inviting investments to invest Agri, Bio-Mass, coal, sugar, solar, soya and wine sectors. Argentina was the largest wine exporter worldwide and India was the largest consumer for it. The India and Argentina had set a trade target of $3 billion by 2012 from $1.3 billion in 2008. Indian exports to Argentina in 2008 amounted to $289.7 million, while Argentina’s exports to India were valued at $ 906 million. Chemical products account for about 40 % of India's total exports to Argentina, while edible oils constitute 75 % of total imports from Argentina.
Posted by Venkat at Monday, December 24, 2012