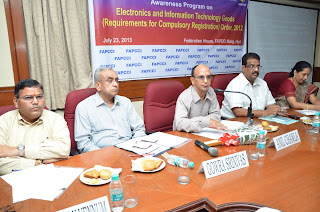 Mr. Anil Chawla said that the Indian Standard as an alternative mechanism to the certification regime in order to facilitate the growth of emerging technologies as well as  protecting consumers from spurious and sub-standards goods. To stop import of sub standard products, IT industry wants to have some legal framework so that all articles sold in India shall compulsorily meet requirements of Indian standards.

Every manufacturer of the articles notified by the Central Government for compulsory registration shall apply to the Bureau for grant of registration for self declaration.

Electronic games (video), Laptops and tablets, Plasma/LCD/LED televisions of screen size 32 inches and above, Optical disc players with built-in amplifiers of input power 200 W and above, Microwave ovens, Visual display units, video monitors of screen size 32 inches and above, Printers, plotters, Scanners, Wireless keyboards, Telephone answering machines, Amplifiers with input power of 2000 W and above, Electronic musical systems with input power of 200 W and above, Electronic clocks with mains powers, Set-top boxes and Automatic data processing machine Products need to be certified by the Bureau of Indian Standards under the section 10(1)(d) and 15(1) of BIS Act. Registration for self declaration of conformity to the relevant Indian Standard on voluntary or compulsory basis is open for only those articles which may be considered expedient in public interest and so notified by the Central Government after consulting the Bureau Mr. Anil Chawla said.