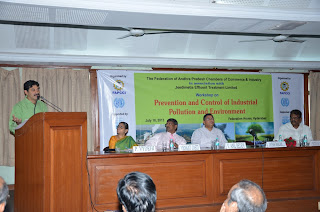 Mr. Srinivas Ayyadevara said that a combination of Industries in Andhra Pradesh very significantly contributes to the State’s economic growth and development.

Mr. Jayesh Ranjan, IAS said that the nation’s economic growth and prosperity depended on industrial growth. Industrial development is the main engine for every country’s development as well. At the same time industrialist also must aware about environmental cautions and they should support environment though pollution control. 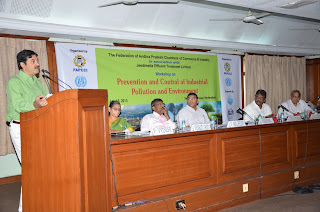 Mr. G.K.B. Chaowdhary stated that the Industrial growth and technological progress are two sides of a coin.  Curtailing one hampers the development of other. Expansion of industries should not be prohibited but the regulatory mechanism for prevention and control of pollution should operate effectively to enforce adequate control measures to meet the regulatory standards.

Mr. Venkat Jasti said that Environmental standards must reflect the economic and social development situation in which they apply. Standards adopted in one society or context may have unacceptable economic and social costs if applied without discrimination in another society or context. Setting environmental standards would involve several considerations, i.e. risks to human health, risks to other environmental entities, technical feasibility, costs of compliance and strategic considerations.

Review the body of existing legislation in order to develop synergies among relevant statutes and regulations, eliminate obsolescence, and amalgamate provisions with similar objectives, in line with the National Environment Policy. Further, encourage and facilitate review of legislation at the level of State and Local Governments with a view to ensuring their consistency with this policy….The issues such as applicable hydraulic load norms for becoming members in CETP in our State and the approach and norms followed by other State PCBs may be studied and a road map may be prepared for overall development of the industry by encouraging to have CETPs in place of insisting individual industries to have on site treatment systems Mr. Venkat Jasti said.