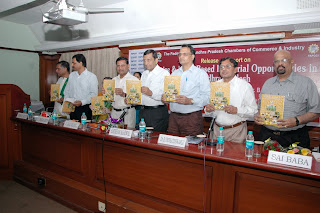 Mr. V. Nagi Reddy, IAS, Principle Secretary to the Government, Agriculture and Cooperation, Government of Andhra Pradesh released the Report on “ Maize and Maize Based Industries – Opportunities in Andhra Pradesh” on 16th March, 2011 of the Federation of Andhra Pradesh Chambers of Commerce and Industry. Dr. B. Venkateswarlu Director, Central Research Institute of Dryland Agriculture was the Guest of Honour at the programme. 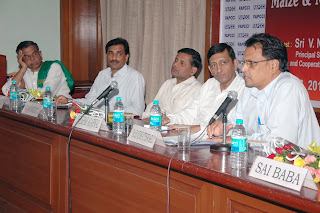 He stated that the State Government would provide all the facilities and support to the entrepreneurs who come forward to set up the industrial units in the Maize and Maize based products, he said that the cultivation of Maize has grown enormously in rabi season also as earlier it was cultivated only in the Khariff Season. Speaking about the maize production in the State, Mr. Nagi Reddy said that, about 2 lakhs tons in Rabi and 7 lakh tons in Khariff are cultivated in 6 lakh hectares. He stressed that there is good demand in domestic as well as international market for the maize and maize based products in addition to its traditional use by poultry and dairy sector as feed. As there is good potential for the maize based food products and industrial products, he requested the entrepreneurs also look into the aspect of starting small and medium enterprises in the rural area of the State which would help in creating more employment opportunities.

Dr. B. Venkateswarlu, Director, Central Research Institute for Dryland Agriculture, speaking at the occasion stated that their Institutes are taking up extensive research programmes of agriculture under the supervision of 40 scientists. He said that farmers and entrepreneurs could also be benefitted from the technical assistance in identifying the suitable maize. 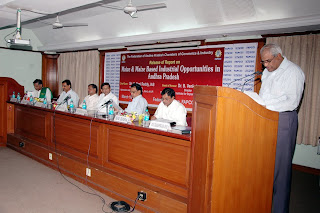 Mr. Chengal Reddy, president, The Federation of Farmers Association, in his address stated that FAPCCI should set up a full-fledged information cell to provide guidance to the entrepreneurs who wish to set up units in the maize and maize based products, so that the information given in the Report would be utilized and also organize awareness programmes about the maize usages. He stated that the scientists, industrialists and Government should work in close cooperation to bring the development in the maize production.

Earlier, in his welcome Address, Mr. Shekhar Agarwal, President, FAPCCI stated that to Government to have a special Department for the production of maize and promotion of maize based industries in the State by involving the representatives of farmers, scientists, entrepreneurs, government officials. The Department works towards the quality maize production, promotion of industries in food processing and other maize based industries promotion, so that to develop Andhra Pradesh as Maize State of the Country.

Mr. K. Bhaskar Reddy, Chairman, agriculture and Agro based industries Committee, of FAPCCI and Mr. Saibaba, of Jain Irrigation spoke at the occasion.