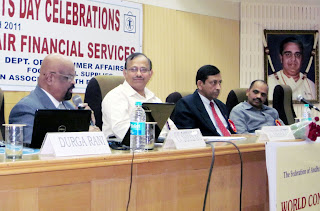 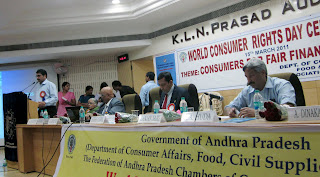 Mr. Sanjay Jaju, IAS., Commissioner of Civil Supplies and Chief Guest of the Evening addressed on World Consumer Rights Day relating to how the Government of AP is taking the responsibility of protecting consumers from the fraud financial companies, chit funds and banks.

Mr. Shekhar, Chief General Manager of HDFC Bank explained various products offered by the Banks for the safe investments of the individuals.

Mr. M.Sebastian, RBI Ombudsman has given keynote address on “Fair Financial Services and How the Ombudsman are safeguarding the interests of the consumers related to banks and financial companies”. He said the people should not be greedy and invest for high returns.

The Organizers’ organized various competitions on Consumer Relations to the students of various schools in the city.