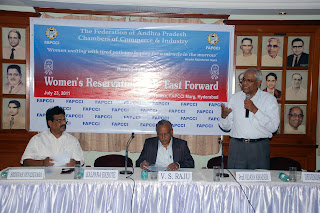 Mr. VS Raju, President of FAPCCI announced the 94th Annual Function of the Federation of Andhra Pradesh Chambers of Commerce and Industry (FAPCCI) and presentation of “FAPCCI Excellence Awards – 2011” to day at Federation House.

FAPCCI has instituted Excellence Awards to foster and enhance excellence in important national endeavor in economic and social sectors that are of particular relevance to the state of Andhra Pradesh. Every year FAPCCI honors industrial and commercial organizations, distinguished and eminent personalities, who have made outstanding contribution in the state of Andhra Pradesh. The Awards will be presented by the Hon’ble Chief Minister of Andhra Pradesh Sri N. Kiran Kumar Reddy on 28 July 2011 at KLN Prasad Auditorium, Federation House at the Annual Function of FAPCCI.

“We received 120 entries for the 19 awards. This year we have added two new entries for special innovations in science and technology” FAPCCI President Mr V S Raju said.