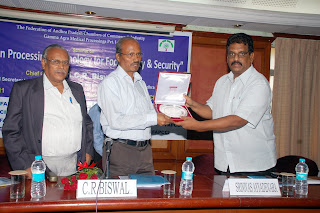 Mr. C.R. Biswal said IN HIS Chief Guest address is that the Radiation processing of food stuffs is a universally accepted technology and used in scientific and commercial applications in Agriculture, Animal Husbandry, Medical Sciences, and Pharmaceuticals etc. One of the most important applications is in the post-harvest handling and management of food stuffs. This process improves food conservation, food hygiene and paves the way for higher food exports. It eliminates quarantine barriers at the port of importation. It enhances the shelf life of food products and facilitates in packaging, storage, transport and distribution of foodstuffs for the end consumer usage. Radiation processing is useful in preservation of food items since it destroys organisms that cause spoilage, thus extending shelf life.

Mr. Biswal said the safety and nutritional adequacy of irradiated foods for human consumption is well established. India is one of the few countries that have the expertise in the deployment of radiation technology. Food safety is a important topic worldwide. Irradiation is a proven and effective post-harvest method to reduce losses, eliminate food-borne pathogens in foods and enables the control of insects and pests, including pests of quarantine, in agricultural commodities. The technology helps developing countries in their efforts to improve food safety and quality and to facilitate trade in foodstuffs. Irradiation is a direct, simple and efficient one-time process. Good numbers of countries are using this process in food processing industries and institutional catering. In 1986, the Government of India set up a National Monitoring Agency to oversee commercial application of radiation processing of food. In 1991 the Atomic Energy Act was amended and Atomic Energy (Control of Irradiation of Food) Rules were framed. In 1994, Government of India amended Prevention of Food Adulteration Act (1954) Rules and approved irradiation of onion, potato and spices for domestic market. Additional items were approved in 1998 and 2001. In 2004 the Ministry of Agriculture amended its quarantine regulation to include irradiation as a quarantine treatment. Then BARC has also approached the Ministry of Health for providing generic or class-wise approval for radiation processing for agricultural and food commodities. Preservation of food by ionizing radiations involves controlled application of energy of ionizing radiation such as gamma rays, X-rays, and accelerated electrons on agricultural commodities, foods and food ingredients for improving their storage life, hygiene and safety.

As far as Food Processing and Horticulture Sectors are concerned, Ministry of Food Processing Industries, National Horticulture Mission and National Horticulture Board are providing financial assistance for setting up and modernizing the processing units and creation of infrastructure and development of human resources in addition to other promotional measures to encourage the growth of the Food sector. They are also providing financial assistance to the private sector and Government Agencies for setting up cold chain infrastructure including refrigerated transport vehicles and different kinds of cold storages under various schemes.

It may be mentioned here that the State Government is providing storage support under the Central Sector Schemes of Development and Strengthening of Agricultural Marketing Infrastructure, Grading and Standardization being implemented by the Directorate of Marketing and Inspection. Government of Andhra Pradesh is also providing Incentives and Concessions to the Food Processing Industries.

Mr. Biswal also said that the Food Processing is declared as Small Industry and is eligible for relief from minimum electricity charges during off season when the unit is not functioning. 25% cost of external infrastructure for power, water, approach roads and other infrastructures limited Rs.2.00 crores. Reimbursement on State Goods & Services Tax for Mega Food Parks during the construction period for a period of 2 years limited to a maximum Rs.2.00 crores. Reimbursement power cost @ Rs.1.00 per unit (upper ceiling) on the proposed revised rates (2010-11) for 5 years. In case, decrease in power tariff, the reimbursement will be reduced proportionately. All eligible industries/enterprises under Food Processing will also eligible for other benefits as per the Industrial Investment Promotion Policy 2010-15.

He urges the investors to take advantage the liberal incentives being provided by the Government and invest in food processing units. To-day Food Processing Industry is a sunrise industry and has immensial for growth and therefore this industry offers unique opportunity for investment 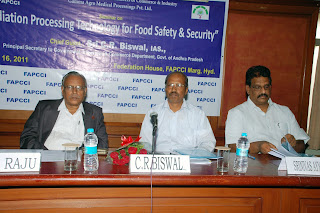 Mr. V.S. Raju, President, FAPCCI said in his welcome address is that the Food preservation is a need to have supply of food throughout the year particularly during crop failure/natural disaster and to supply food across a large area where it is not produced. Food is most precious commodity on earth to the human life. Life is not sustained without adequate food. Therefore, food security and preservation are more important.

He said that the Rapid urbanization, depletion in the quantum of arable land, uncertain agro-climatic conditions, primitive practices of harvesting and storage of food grains and long distances between harvesting and consumption centers have only added to the necessity for better preservation and effective utilization. About 20-40% of our agricultural produce is lost due to spoilage by pests, insects and microbes. Microbial contaminants cause human illness and produce toxins also renders food unsafe for consumption. Therefore Radiation Technology is essential to preserve agricultural commodities and food products.

Mr. Raju also said that India is the world`s second largest food producing country and has the potential to be the world`s number one country. After achieving self-reliance in agriculture production through “green revolution “we are not only in a position to feed our own people, but also in a position to export agricultural produce. In this connection, Radiation technology has played a significant role in increasing shelf life. Food preservation by radiation involves application of nuclear energy to agricultural commodities, for improving their storage life, hygiene, and for overcoming quarantine barriers to international trade. It facilitates packing, storage, transport and distribution of food. Thus, radiation processing can be supplementary and sustain agriculture, horticultural and food products.