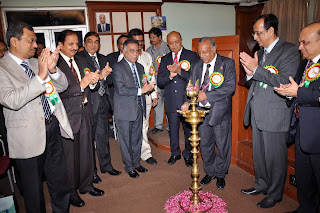 Dr. Ramanuj Narayan said his keynote address is that the today resin manufacturers require innovative and green initiatives for sustainable development. Identity, Institute interactive strengthening will provide the small and medium scale industries to bridge the relevant technical gap and will be helpful is developing the world class resins. To reach to global R&D and testing of the product is very important and it is the theme on which IRMA is organizing a technical seminar today. Another important aspect of resin development is the use of natural and renewable resin us will newer chemistry and methodology for greener and sustainable future. The public awareness on resin, recycling of polymers, waste utilization, energy minimization is the manufacture which will be taken up by IRMA in near future. All the other issues related to resin industry are addressed by IRMA on common platform provided for members.

Mr. V.S. Raju said that the Resins usually originate from viscous substances of plant and it is one of the commonly found in clear to translucent yellow or brown colors and solid or semisolid substance. Resins are widely used in inks, lacquers, adhesives, varnishes, pharmaceuticals and synthetic plastics.

New Committee for Southern Region of IRMA was elected