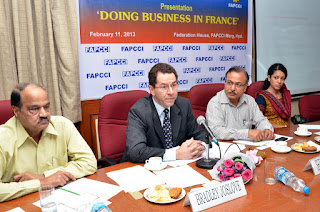 Mr. Bradley Joslove stated in his address is that the - bilateral trade had increased by 6% to 7.46 billion Euro.   France is the 9th largest foreign investor in India with a cumulative investment of approximately USD 3 billion during the period April 2000 to June 2012.  India is the 13th largest foreign investor in France in terms of project numbers.  There is a growing and wide-ranging cooperation in areas such as trade and investment, culture, science & technology and education.