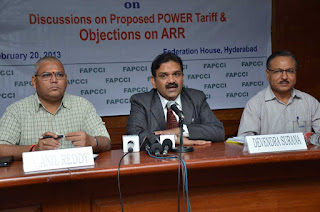 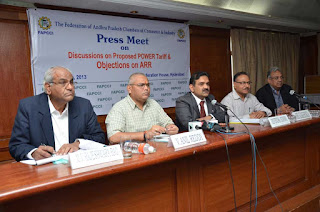 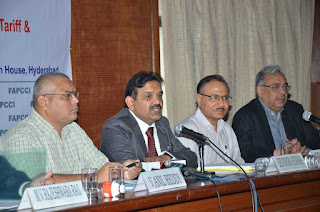 PRESS BRIEF
1. Unreasonable Increase over 3 Years:
Andhra Pradesh historically has the lowest power tariffs because of the natural advantage of having Hydro Power, Coal and Gas reserves. But the situation has been changing despite the natural advantages, the tariff proposed to be steeply increased making it one of the highest in the country (rank 7 with proposed tariff).

It is been mandated in the National Tariff Policy that the cost over cost of service should be the maximum of 20%. However, we find the industrial consumers are burdened with huge cross subsidies averaging 69.8% for HT 11 KV, 61.3% for HT (33 KV) and 48% for HT (132 KV) which is coming to an average of 60% increase over cost of supply to HT category industries. This huge burden of gross subsidy on HT industrial sector is unlawful and unjustifiable. There is a sudden increase in this percentage in this year.

We therefore request that cross subsidy should be a maximum of 20%, as per National Tariff Policy and decisions of Appellate Tribunal.

The cross subsidy provided by these consumers in all the four distribution utilities in Andhra Pradesh is Rs. 9728 Cr. This is ten times the total budget for industry and almost ½ of sales tax paid by industry.

The Subsidy element to agriculture has been continuously going up over the last few years.

Every year the actual power supplied and its cost is higher than as estimated and the total Back log to be recovered from Government: 8865.55 (Rs.Cr).  This amount is being collected as FSA from Industry.

The subsidy requirement by all the four distributions utilities for FY 2014 is estimated at Rs.14,866.99 Cr which is almost three times more than the approved subsidy of Rs. 5884.37 Cr by the Government. That means imposition of higher burdens on consumers in the form of tariff hikes.
When compared to the tariff proposal supply to agriculture has always been higher leading to an additional burden which is being passed on as FSA to industry.

There are two side effects from the power being given to formers. As there is absolutely no incentive for efficiency to farmers, the pump sets are running 18% to 20% efficiency. With proper use of capacitors, good quality winding and bearings, the efficiency of the pump can be increase upto 60%. This means that more than 50% of the power is being wasted.

As there is no cost to the power, and power is being given at odd times, the pump sets of farmers are ON for full time leading to wastage of water and reduction in the water table in the State.

4. Unreasonable amount of restrictions on industry:

Even when there is a shortage of 10% to 18% of power cut to industry has been a magnitude of 40% to 60%. This has resulted in shortfall of supply to industry and also resulted in huge losses to the DISCOMS.

It is calculated that as per the 2012-13 order the Incidence of FSA is Rs.0.64 Even without any increase in fuel prices only for this reason.