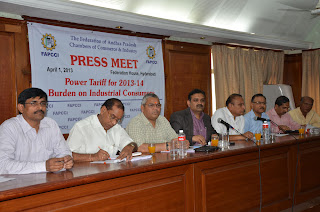 FAPCCI organized a Press conference on power situation in the state and the tariff order issued by APERC on March 30, 2013 at Federation House. Various industries associations have participated and explained the woes of industry due to steep hike in power tariffs for the year 2013. 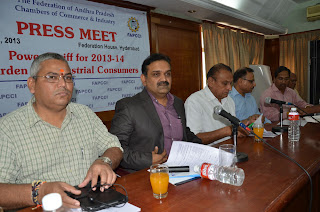 Mr Devendra Surana, President, FAPCCI spoke on various issues of power such as power allocation, availability, FSA charges and burden of subsidy, increase in power price and solar policy of the state. He said that though the power shortage in the state is 10 to 18% industry is subjected to 50% power cuts in the past 18 months which is unfair. The burden of FSA was more on industry because of reduction in metered sales of power and increase in agricultural sales. He explained that because of this though there is no change in fuel cost the industry is burden with an FSA of 0.64 paisa per unit. He also mentioned that the huge penalties which were imposed on industrial consumers for excess consumption of their allowed CMD as per R&C measures are calculated wrongly and informed with a long delay causing huge burden to industrial units.  He criticized that Government failed to implement the relief measures announced almost 6 months back such as refund of vat on diesel used for power generation and removal of electricity duty on captive generation. The solar power which was announced in September 2012 is still not clear on various issues like, banking charges, wheeling agreement, transmission & wheeling charges, and cross subsidy charges due to which no project is off the ground in the State.

The present tariff order passed by APERC imposed heavy burden on industrial consumers with price hike ranging from 25% to 60%, he said. 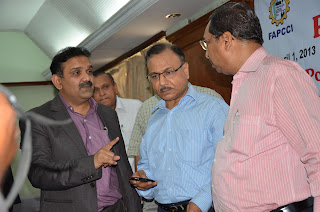 Mr. Shiv Kumar Rungta, Vice President, FAPCCI said that the government should reduce the tariff hike to the small sector and release the incentives immediately.

Mr. V. Anil Reddy, Chairman, Energy Committee, FAPCCI expressed his concern saying that though government is stating that MSMEs are important for the economic growth, they are hard hit by the present tariff hikes. The increase in power tariff for small industries is almost 75% which is unprecedented and he said that the industries have no other option but to close down the unit.

Mr. M.M. Sreeram Murthy, Chairman, Economic Affairs committee, FAPCCI said that though FAPCCI and all other industry associations cautioned the government about the impending power crisis in the State from 2008, and asked to take preventive measures, Government failed to take any measures to prevent the crisis. He stated that the manufacturing sector in the State recorded 11% negative growth in this year where as the National Policy on manufacturing sector aimed at increasing the share of manufacturing in GDP to 25%.

Mr. J. Nageswara Rao, President, FAPSIA said that due to the power shortage in the State, production is reduced by 45% and employment by 40% in the small scale sector. He also said that the incentives / subsidies were pending for the last four years to the tune of Rs 1200 crores.

Mr. Suresh Kumar Singhal, President, Steel Manufacturers Association said that power is the major input for steel industry and the industry is getting only 35% of power for the past 18 months and said that this day is a black day for Industry in the State.

Mr. Narsing Rao, medak Small Scale Industries Association said that most of the small industries located in and around medak are selling their units because of high power tariffs and acute shortage of power.
Mr. Sadha Shiva Reddy, President, Jeedimetla Industrial Association commented that Government  is trying to make Andhra Pradesh a power surplus state and working towards it by forcing the industrial units in the state to closed down.