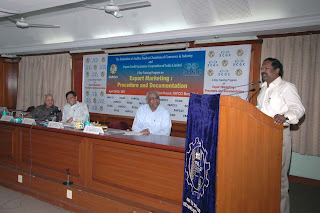 Mr. Gopanath said in this occasion is that the Export marketing is playing a vital role in Indian economy, and it reaches 247 billion dollars in the last economical year. And 3.3 billion dollar the policy the government have export and import commodities to understand the export policies we can trade classification principles of restrictions like surplus international local requirements 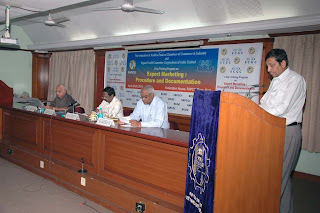 Mr. Shekhar Agarwal said in his welcome address is that the India’s progress in terms of exporting goods and services has been remarkable since the mid-1990s, especially compared with India’s position in the early 1990s. The recent growth in Indian exports is primarily led by an increase in factor productivity, growth in world trade, increase in intra-industry trade and external sector reforms.

The exports for the year ending March 2011 touched US$ 245.9 billion registering a growth of 37.5%. For the first time the figures have reached the US$ 200 billion mark which was a target set for last financial year and exports have indeed exceeded our expectation. Imports for the same period stood at US$ 350.3 billion and the trade deficit figure has come down to US$ 10.4.4 billion.

Small and medium scale enterprises are the most significant contributor in the field of India's exports. There has been a prominent increase in the exports from this sector of both traditional and non-traditional goods including jewelery, garments, leather, hand tools, engineering goods, software, etc. Also, the enterprises with good export performance have greater stability in the economy. But, there is still lot of problems in exporting the products by small and medium entrepreneurs to other regions/ countries/ areas. They are not very familiar with the steps and formalities involved in exporting goods from India. They need to be made aware of all the steps involved in the process, such as, registration of exporters; selection of export market and buyers; receipt of enquiries, letter of intent, letter of credit, bill of lading, etc; insurance coverage; obtaining shipping order; certificate of origin; sending documents to importers; etc. I am sure, this program will benefit the participants in understanding the various aspects of export business.

Mr. hariharan said that Andhra Pradesh achieved an average annual economic growth rate of 9% for the 5 years period from 2004-2009. The continuous investments in infrastructure have given a boost to foreign and domestic investment, and the city has become a major destination for corporates and institutions. Tata Institute of Fundamental Research is the very recent addition. Andhra Pradesh, being ranked first in the manufacturing of bulk drugs and third in formulations in the country, accounts for 40 per cent of the total Indian bulk drug production and 50 per cent of the bulk drug exports. Andhra Pradesh with the Central Govt. is promoting a pharma cluster with Rs 66.16 crore at the Petroleum, Chemicals, Petrochemical Investment Region covering East Godavari and Vizag where waste could be let out into the sea.