Pattern of Industrial Growth and Investment in AP 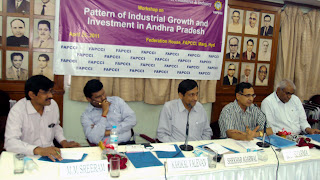 Workshop on “Pattern of Industrial Growth and Investment in AP” is held on 25th April 2011, from 4 pm at Surana Udyog Hall, Federation House, Red Hills. Principal Secretary (Finance and Planning) to the Government of AP Mr. J.C. Sharma was the chief guest for the occasion. Mr. Karikal Valevan, Commissioner of Industries has presided over the workshop.

Mr. J.C. Sharma said in his chief guest address is that though the industrial policy is acclaimed by one and all as the best policy; there are certain gaps in implementation that needs to be taken care of. He further stated that studies should be followed by action, so that desired results can be achieved. The case for revival of APIDC will be taken up with the government very soon and see whether the responsibility of promotion of specific sectors can be given to APIDC. 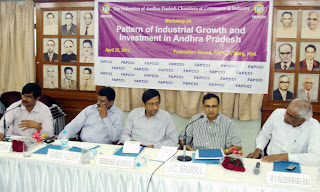 Mr. Karikal Valevan has said that Government is trying to develop sector specific policies to speed up the industrial growth in the State. He congratulated FAPCCI for playing a pro-active role in promoting industrial sector.

Mr. Shekhar Agarwal, said in his welcome address said that the The Indian economy is firmly on the path of steady growth. The recent spurt in growth is propelled by radical reforms such as the removal of restrictions on foreign investment and industrial de-licensing. This trend is expected to continue in the future, driven by a favorable business policy environment in terms of tax cuts, broadening tax base and reduced interest rates.

The liberalization of the economy has opened new windows of opportunity for manufacturing sector. Increasingly the success of manufacturing sector is dependent on innovation, research and development. It is critical not only to remain competitive but also significant advantages can be gained by developing and commercializing new technologies.

The structural transformation of the Indian economy over the last three decades has been spectacular growth of the Services Sector, which now accounts for more than 50% of the GDP.

However the rapid growth of the services sector much before the manufacturing industry attaining maturity is not a healthy sign. A Knowledge-based economy cannot be sustained in the long run unless it is adequately supported by a growing manufacturing economy.. Moreover a service economy cannot continue to thrive on a long term basis in a country where over 80% of the population education is below the middle school level.