Workshop on “Win Before You Begin” 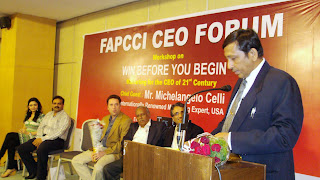 Workshop on “Win Before You Begin” is organized by FAPCCI CEO Forum at Hotel Katria, Somajiguda. Mr. Michelangelo Celli, Chairman, Cornucopia Group and a management expert based in the US was the chief guest for the seminar.

Mr. Celli said in his key note address is that the Changes that come about in marketing and challenges they pose to CEOs are faster than what B-schools can conceive and teach. Most often CEOs tend to neglect the most important aspect of marketing, which is the role played by the CEO himself.

“Our experience working with companies in the US shows that the last stone that is left unturned to analyze the problem is the role played by the CEO himself. Often they tend to think that the problem is with others in the company rather than analyzing how they are looking at marketing,” he sought to convey to those gathered at the interactive session here today. 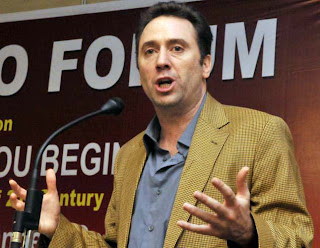 The Indian market situation is lot different from what is in the West where there is intense competition and struggle to garner share. Some companies which have been doing well for nearly two decades could suddenly find themselves in deep trouble as they are not able to keep pace with the rapidly changing marketing demands. There is also this tendency of confusing marketing with sales, he warned.

Citing the case of a refrigerator, which has been working well for last 10 years but had broken down? He said the immediate reaction is to look at replacing it with a new one. For all you know that it could be a minor problem with its cable. Drawing the same analogy, he said company CEO's need to look at marketing with new insights. Sometimes, they may need expert guidance.

The President of Fapcci, Mr. Shekhar Agarwal, said that great warrior Napoleon Bonaparte when asked by his senior warriors what set him apart in winning wars against tough opposition, he said that battles are won in the mind not on the battlefields.