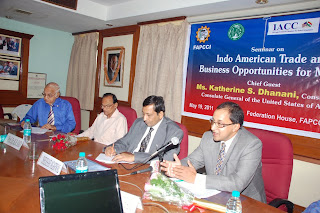 Seminar on ‘Indo- American Trade – Business Opportunities for MSMEs’ is organized by FAPCCI in association with Indo-American Chamber of Commerce and Indian Society for Public & International Affairs, Pune at Federation House, Red Hills.

Mr. Vishnu M. Choudhary, MC Member, Indo-American Chamber of Commerce said in his key note address is that the MSME sector is playing a vital role in world economic and employment development, particularly this MSME sector is rolling US economic development.

He also said that the despite the current global uncertainty, the US is the largest recipient of Indian outbound investments. India is the second largest investor in the US after UAE and in the last few years, Indian companies have invested over US$ 21 billion in the US economy. The US’ share in India’s outward FDI has increased to 6.5% in financial year 2010 from 5.7% in financial year 2009. Indian investment and trade in the US in the past two financial years stood at approximately US$50 billion. 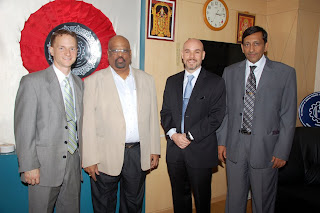 He also explained that the according to RBI, in 2007-2008, actual FDI totaled USD 18.37 billion. Of this, equity investments (not including investments of individuals and banks) were valued at USD 15.18 billion and loans accounted for USD3.19 billion. Proposals valued at USD 8.94 billion were cleared for overseas investments in joint ventures and WOS.

Prof. Dr. K.R. Rao, Director, Indian Society for Public & International Affairs, Pune said that the foreign direct inventors are interested to invest AP based MSME’s who are doing export business with the US. The banks also ready to give the sufficient loans to such sectors or companies. The Indian Society for Public & International Affairs is organizing numerous workshops and seminars to develop international trade relations between all global and growing countries. 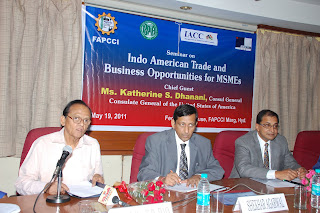 The President of Fapcci, Mr. Shekhar Agarwal, said that politically and economically, United States and India play a significant role in the global arena. USA is India's largest export destination and also one of the leading foreign investors in India.

The visit of US President Mr. Barak Obama deepened India-USA co-operation in pursuit of clean energy technologies including the creation of new clean energy research centre and continuing joint research into solar, bio-fuels, shale gas and building efficiency. These would definitely help India to develop its space technology and defense industry.

India's rapidly expanding economy along with a booming consumer market and easy availability of skilled personnel has been instrumental in attracting several American companies to invest in India. USA is the third largest contributor of Foreign Direct Investment (FDI) in India. Engagement between the Indian and USA Small and Medium Enterprise sectors is crucial for creating a favorable business and policy environment to strengthen economic recovery, stimulate growth and create jobs in both the countries. There are several areas where there is abundant scope to further improve economic cooperation between India and USA. Opportunities for progress exists especially in areas like communication infrastructure, IT, telecom, IT-enabled services, data centers, software development, and other knowledge industries such as pharmaceuticals and biotechnology.

Andhra Pradesh is one of the fastest growing economies in world and became one of the hottest investment destinations among the various investment options in the fast growing emerging economies. The State is Ranked 2nd in the country in attracting investments. In a recent World Bank Report, Hyderabad is ranked second easily accessible city in India for doing business. The booming Andhra Pradesh economy has a lot to offer for foreign investors, foreign institutional investors, venture capitalists, and portfolio managers etc. to leverage vast pool of natural, human and intellectual resources of Andhra Pradesh, apart from various attractive investment opportunities.

Mr. Hari Haran, Co-Chairman, International Trade Committee, FAPCCI the India-US Trade Policy Forum (TPF) and the arrangement between the two governments to discuss trade and investment issues is a welcome step. The issues and concerns are discussed under five focus groups, agriculture, tariff and non-tariff barriers, services, innovation and creativity, investment. This would help in furthering the trade between the two countries.

The SME sector can achieve great heights by ushering innovation, competitiveness and sustainability. Unlike many developed economies SMEs are well defined in India and their spectrum is quite wide. This sector plays an important role in the growth of economy. India and USA can promote their strategic business alliance and facilitate capacity building and innovation by engaging the Small and Medium Enterprises (SMEs) of both the nations.