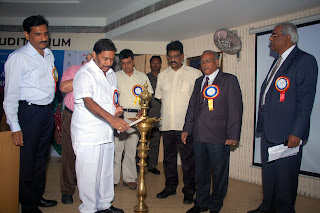 Mr. P. Vishwarup, Hon’ble Minister said that the Over the years, efforts of expanding milk availability through increased Milk Production has resulted in growing per capita availability of milk from 105 gram per day in 1970 to current level of more than 200 grams per day. The expected target of milk production by 2020 is about 150 million MTs. The Milk production in Andhra Pradesh has gone up from 72.57 Lakhs MTs in the year 2004 to112.56 Lakhs MTs in the year 2011. For sustaining further development, Dairy Industry has to cope with the rapid transformations that are taking place in Indian Economy.

Our Dairy farmers are being benefited from different Dairy Development schemes in India. State has spent about 93 Crores for development of dairy activities through APDDCF during the last seven years on various schemes like Pasu Kranti Patham, CM Package, PM Package, IDDP, RKVY etc to increase the milk production and productivity by providing suitable infrastructure, forward and backward linkages for Milk producers in Milk procurement, providing marketing facilities and capacity building etc. By implementing the above schemes, Federation is procuring an additional milk of about 70000 and about 40000 milk producers were benefited under various programmes. 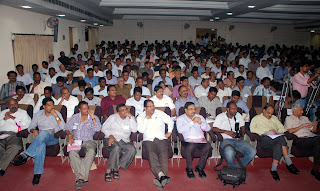 Mr. Vishwarup also said that - under National Dairy Plan, proposals have been made to increase the Milk Production and productivity further and increasing the organized sector’s share in Milk marketing. Establishment of new BMCUs and expansion of marketing facilities in II tier and III tier cities with an outlay of Rs.723.00 Crores is proposed in the coming next 4 years. Under MGNREGS

programme, it is planned to mobilize the villages to be self sufficient in fodder production through development of fodder nurseries, bund plantation, perennial fodder crops and fodder conservation with an outlay of Rs.965.00 Crores in the coming next 4 years.

Further RKVY Project functioning since 2007-08 is providing initiatives in dairy development activities. 68 Bulk Milk Cooling Units were established duly covering 1318 new villages. Modernization of the Milk Products Factory, Hyderabad has been taken up in this scheme to improve the Milk Processing and quality apart from establishment of One UHT Milk Packing station. Further proposals have been made for additional milk chilling and processing facilities by establishing Three

Medak District. Similarly Special initiatives will be taken up for development of dairy sectors in Warangal and West Godavari districts by further establishments of New BMCU’s Mr Vishwarup said.

Access to significant technological innovations, development and creation of infrastructural facilities were also given considerable boost to dairy development. Animal health and quantity breading practices were also contributed for further development of dairy activities. This made our country to reach the distinction of being the highest Milk producer in the world with an average growth rate of 4-6 percent per annum. In terms of Milk Production, more than 110 million tones of milk in India during 2010-11 and Andhra Pradesh stands at 2nd position in India. This helped in improving quality of life of the rural public apart from employment generation amongst the rural people Hon’ble Minister explained. 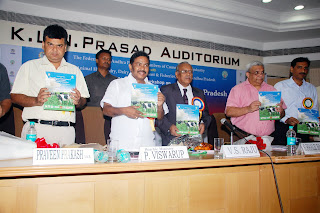 Keeping this in view for the development of Live Stock, milk and milk products in the State FAPCCI is organizing this workshop. The subject selected for the workshop relate to practical issues aiming at enhancing the competitiveness, utilizing the available opportunities and creating optimum share in the dairy markets. I hope the deliberations of the workshop will be fruitful and suggest ways and means to improve the competitiveness of the Dairy sector he said.

Mr. Praveen Prakash, IAS, Managing Director, APDDCF said that 40 bulk cooling centers are ready to be given to the formers or entrepreneurs.