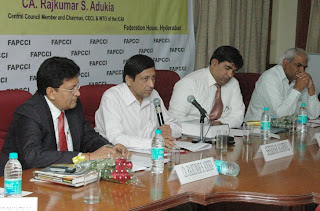 The Federation of Andhra Pradesh Chambers of Commerce and Industry (FAPCCI) is organized a awareness program on “Arbitration & Carbon Credit” on Tuesday 23, November 2010 at 4.00 p.m. at Federation House, Red Hills, Hyderabad.

This workshop is focused on the commercial and economical laws and institutional arbitration courts and Carbon Credit issues.

The president of FAPCCI Mr. Shekhar Agarwal welcomes the Chairman of CECL & WTO Mr. Rajkumar S. Adukia and eminent other experts in Chartered Accountancy. He stated that the Principle mechanism for the dispute settlement has been the judiciary as the third estate of the State. The judiciary became the fountain source of justice to the common man. But over a period of time judiciary came to be a over-burdened with ever increasing volume of adjudicative work because of phenomenal increase in the volume of court cases and greater legal consciousness of people with new areas of litigation of civil and criminal nature in the areas of Taxation, Services, consumer protection, family disputes, accident claims, intellectual property, health care and so on. Justice was increasingly becoming too expensive and too time consuming for the common man. 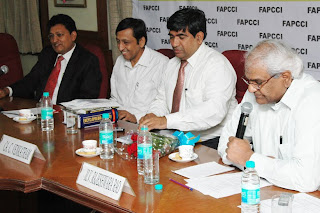 The Chairman, Committee on Economic, Commercial Laws & WTO Mr. Rajkumar S. Adukia stated on the institutional arbitration courts required for the state of Andhra Pradesh to resolve industrial and economical cases are pending from many years in state courts as well as national courts. The arbitration is a process of dispute resolution in which nominated as third party renders a decision after hearing at which both parties.