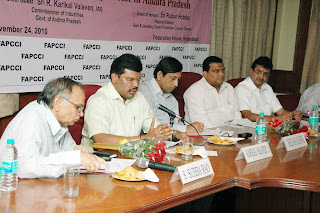 The Federation of Andhra Pradesh Chambers of Commerce and Industry (FAPCCI) organized a Workshop on “Prospects and Opportunities of Gem and Jewellery Sector in AP” on Wednesday 24, November 2010 at 10.30 a.m. at Federation House, Red Hills, Hyderabad.

This workshop is focused on the Export potential opportunities in Gem and Jewellery sector, Common Facilities for infrastructure and design development and testing facilities; awareness level about the quality of gold, especially in semi urban and rural areas to identify the prospects for all around development of the sector. 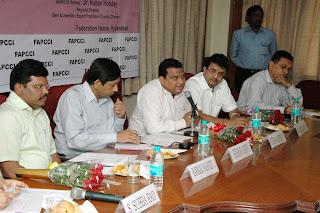 President, FAPCCI brought to the notice of Commissioner of Industries that there is need to create more infrastructure facilities like common testing labs, Exclusive gem and jeweler parks and incubation facilities and skills up-gradation programs for the artisans of this sector in the important places like Guntur, Nellore, Kadapa and Visakhapatnam where the traditional designs are being practiced. 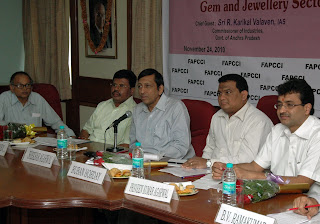 Mr. Karikal Valaven stated that the Indian Gems and Jewellery industry is one of the fastest growing segments in the Indian economy with an annual growth rate of over 15%. Gems & Jewellery industry became one of the leading growth oriented sector in India recording an export turnover of around $ 16 Billion during 2008-09, making it a significant foreign exchange earner for the country. The UAE was the largest importer of Gems and Jewellery from India in 2008-09, with a share of 31 per cent. This was followed by Hong Kong and US with 25 per cent and 20 per cent respectively.

This apart, India is the largest of consumer of gold jewellery in the world, accounting for about 20% of world consumption. It is also the largest diamond cutting and polishing center in the world with 60% value share and 92% share of the world market by number of pieces. India is third largest consumer of polished diamonds after USA and Japan.

Coming to Andhra Pradesh, it is emerging as one of the fastest growing centre for Gem & Jewellery industry in India. To cater to the needs of Gems & Jewellery Industry, Government of Andhra Pradesh in joint venture with IOI Corporation Berhand, Malaysia has promoted AP Gems park, one of its uniqiu kind in India to have an exclusive Pearls-Jewellery-Diamond Pavilion having 205 Lakh Sq.ft shopping area. AP Gems and Jewellery Park is poised to be center of the international gems and jewellery industry. 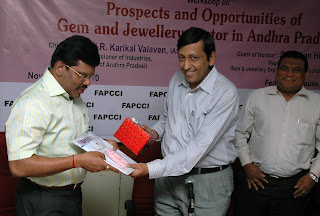 Mr. Ruban Hobday, said that the VAT to be exempted in Andhra Pradesh on exported like in the states of Tamilnadu and Karnataka gem and Jeweler. And he also requested FAPCCI and Government of AP to introduce Best Jewellers Award to encourage more jewelers to come into export market.

Mr. Praveen Kumar Agarwal emphasized the need to protect the small traders in the business as against the large players and multi nationals.