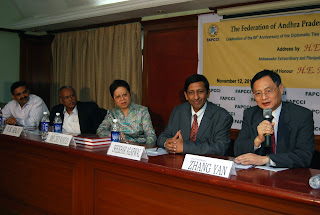 Mr. Zhang in his opening remark said that they were very happy to have visited FAPCCI and for meeting group of business people in Hyderabad. He hoped that his visit will promote a mutual understanding and establish contacts and also promote cooperation between China and India. India and China are the two emerging economic powers. He further said that not only they are developing their economy and living standard of their people but are also contributing to world recovery from the financial crisis which is still lingering. For this, both the countries have to work together to keep up the momentum. Both the countries have strong areas by which we can provide service to the world by complementing each other. India is strong in software and China in hardware. If we cooperate, we can be a great power. In the last ten years, our business has grown up from 2.9 billion USD to 51.7 billion USD in 2008; nearly 20 times increase in less than 10 years. The bilateral trade between India and China reached USD 45 billion during the past 9 months and he hoped the same will go up to 60 billion USD during the year. He also made a mention about Hyderabad being a hub for I.T., pharmaceutical and research. Finally, he said that his embassy will provide all the help and assistance to Indian business people for setting up business ties with China.

Mr. Sekhar Agarwal, President, FAPCCI, welcoming the H.E. Mr. Zhang Yan, Ambassador Extraordinary and Plenipotentiary of the People’s Republic of China to India and H.E. Mme. Chen Wangxia, said opening of China Week in Hyderabad would pave way for building further strong relations between two countries. The economic and diplomatic importance of China and India has in recent years increased the significance of their bilateral relationship. China is now India’s second largest trading partner. Sri Agarwal said FAPCCI is very keen on promoting and developing Andhra Pradesh’s economic cooperation with China. He was sure that this meeting will give an opportunity the businessmen to know the development taking place in both the countries and the scope of establishing business co-operation, joint-ventures, technology import and/or making investment in China.