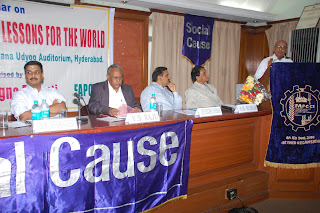 The FAPCCI in association with Pragna Bharathi organized a seminar on “American Debt Crisis – Lessons for the World” on 27th August, 2011 at 5.30 pm at Surana Udyog Auditorium, Federation House, FAPCCI. Mr. M.R. Venkateshan, Economist, Columist & Author from Chennai was the chief guest for the occasion.

Mr V. S. Raju, said that t he downgrading of the US government’s debt credit rating by the rating agency Standard and Poor’s has added new challenges to the Indian financial market. As the country’s economy is facing the threat of a slower GDP growth in the current financial year, industry is reeling under high interest costs; inflation is ruling high and the stock prices are at their 14 months low, trouble in the US economy adds a new dimension.

He also said that one of the 15-largest foreign creditors to the US, India’s exposure to the United States’ ballooning debts is estimated at US $ 41 billion. The overall national debt of the US is moving nearer to $ 15 trillion, out of which it owes over USD 4.5 trillion to foreign countries holding the US government debt securities. While China is the single-largest holder of the US treasury bonds of $1.15 trillion, India stands at 14th position (about Rs 1.83 lakh crore), as per the US Treasury Department data. While the unprecedented downgrading of the US treasury bonds may lower the value of RBI’s holding, the central bank will not be able to switch its reserves to other currencies or to any other form of asset quickly. Some experts feel that the RBI may continue to hold US bonds even with a notch-lower rating, as it has been itself amassing the US treasury securities over the past one year despite a deepening debt crisis there. The Indian holding has grown by about $ 10 billion in the past one year.

As 60 per cent of India’s $60 billion software exports are targeted to the US clients, their weak financials will hamper demand. According to TPI (an Information Service Group Company) data, already the large IT and BPO outsourcing deals in US market were down 50 per cent in the six months January-June 2011 Mr Raju said.

He also expressed the exporters are worried that the debt crisis in the western world will hit demand and lead to a payments problem. Europe and the US account for a third of India's exports. The exporters are expressing concern whether to accept orders coming from the US and the EU (European Union). There is a probability that those might be cancelled mid-stream or our buyers may not be in a position to pay us after receiving goods. In the backdrop of the crisis in the two regions, it is necessary that the Government of India should extend tax sops and other incentives to exporters.

Industry believes that it was the right time for RBI to move ahead of the curve and cut the rates. After all, India could use the current global economic turmoil to its own advantage, just at it withstood the perils of 2008 crisis. It may be noted that a cut in interest rates would have boosted corporate India’s confidence, which has taken a hit. Last but not the least; we need to emphasize the importance of implementing the next phase of structural reforms. Without progress in reforms, investment sentiment will not improve and an opportunity will be missed he said.