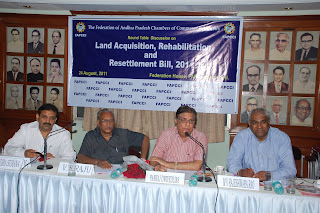 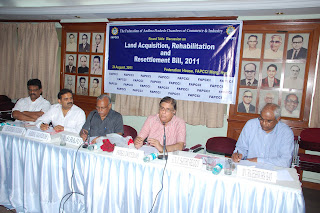 Mr. Pankaj Dwivedi explained about the participants on Draft Land Acquisition & Rehabilitation Bill, 2011 at the round table.

He said that the infrastructure across the country must expand rapidly. Land is an essential requirement for Industrialization; Urbanization especially based on manufacturing as well as agriculture and irrigation also to accelerate. Government also needs to acquire land for a variety of public purposes. In every case, land acquisition must take place in a manner that fully protects the interests of land-owners and also of those whose livelihoods depend on the land being acquired.

Under our Constitution, land is a State subject but land acquisition is a Concurrent subject. So far, the basic law governing the land acquisition process has been the Land Acquisition Act, 1894. Although it has been amended from time to time, it is painfully evident that the basic law has become archaic. Land markets in India are imperfect. There is asymmetry of power (and information) between those wanting to acquire the land and those whose lands are being acquired. That is why there has to be a role for the government to put in place a transparent and flexible set of rules and regulations and to ensure its enforcement.

Mr. Dwivedi also said that Land Acquisition and Rehabilitation and Resettlement (R&R) need to be seen necessarily as two sides of the same coin. R&R must always, in each instance, necessarily follow upon acquisition of land. Not combining the two – R&R and land acquisition – within one law, risks neglect of R&R. This has, indeed, been the experience thus far. The draft Bill seeks to balance the need for facilitating land acquisition for various public purposes including infrastructure development, industrialization and urbanization, while at the same time meaningfully addressing the concerns of farmers and those whose livelihoods are dependent on the land being acquired. 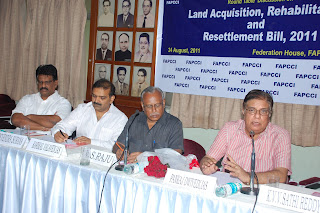 Mr V.S. Raju said that with a spate of controversies and clashes over acquisition of farmland for private projects, the Government of India recently unveiled a draft bill to make the process transparent and equitable to all stakeholders including land owners, with provisions not only for suitable compensation but also post-sale rehabilitation. The Draft bill, which seeks comments from public till 31st August, 2011, stresses on Rehabilitation & Resettlement (R&R) by proposing a transparent legal framework aimed at giving adequate compensation to land owners and ensuring rehabilitation of those displaced farmers.