Conference on “The Economic Freedom Index 2011” 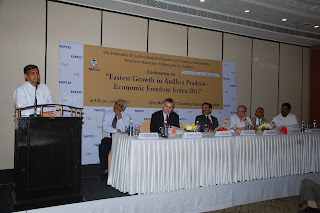 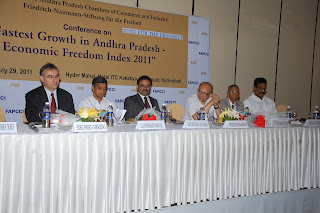 The Summery of the program

The Economic Freedom of the States of India 2009 ranks economic freedom in the 20 biggest Indian states, using a methodology adapted from the Fraser Institute’s Economic Freedom of the World annual reports. The main highlights of this study are as follows. The top three states in economic freedom in 2009 were Tamil Nadu, Gujarat and Andhra Pradesh, in that order. This is significantly different from 2005, when Tamil Nadu was still on top but Madhya Pradesh came 2nd, Himachal Pradesh 3rd, Haryana 4th, and Gujarat 5th. The bottom three states in 2009, in reverse order, were Bihar, Uttarakhand and Assam. Back in 2005, Bihar was still last (20th), Assam was 19th and West Bengal was 18th. 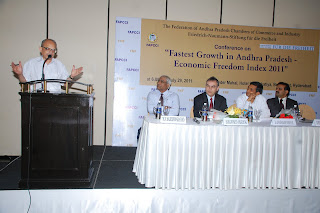 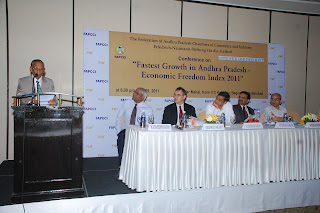 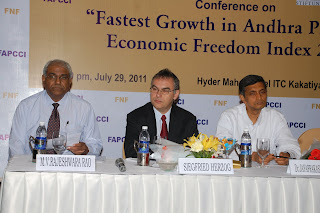 Andhra Pradesh reduced waste and corruption and implemented innovative reforms such as contract teachers to supplement regular teachers, social audit of employment schemes, and private sector participation in infrastructure projects which had earlier been government monopolies.

Three factors—buoyant agriculture, rural infrastructure, and the elimination of Maoism—boosted employment and attracted in-migration from other states. 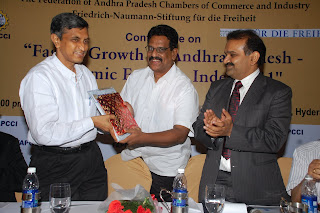 A number of independent studies and indicators support our analysis of Andhra Pradesh. The World Bank/IFC report Doing Business 2010 ranks India a lowly 133rd out of 183. Some Indian cities have worse business conditions than others. Doing Business in India 2009 ranks Hyderabad as the second easiest place to do business among 17 top cities.