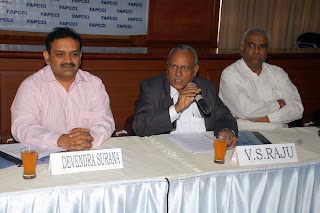 The Press Meet on “Frequent Bandhs – Loss of Production and Exports Tax Revenue to the State” started off at Federation House, Red Hills, Hyderabad. 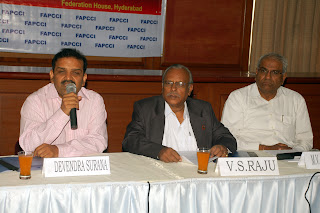 With great sense of pain and concern, FAPCCI brings to the media notice that the enormous loss of the trade and industry are incurring on account of frequent BANDHS.

As far as the city of Hyderabad is concerned, the momentum of development in Hyderabad was built over the decades. And, that momentum has been keeping Hyderabad going forward. Had it not been for the ongoing unrest, Hyderabad and also the State would have recorded much higher industrial and economic growth, city has reasonable good infrastructure in terms of roads, airport, IT connectivity availability of skilled manpower among others. But the city is gradually losing out and its image as a preferred investment destination is getting tarnished.

The growth rate of IT sector is also affected quite adversely over the last few years as investors are looking out to destinations such as Chennai, Pune, NCR, Bangalore etc where there is more vibrancy. As a result getting a new business into Hyderabad is becoming a very difficult task given the uncertainty and instability prevailing in the State. 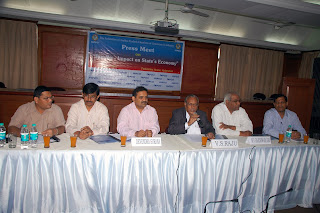 In such a situation of uncertainty and instability several investment proposals awaiting financial closers or collaborations etc., may be have second thought of investing in the State.

On top if the State is losing its most valuable Revenues. They are so very essential for the State to carry on with its development and welfare programs. This loss will entail in slowing down the growth momentum of the State’s economy, which is very essential to raise the prosperity of its people and to eradicate poverty.

In the light of such undesirable and huge loss to the economy, the FAPCCI appeals earnestly to the political parties not to involve the industry and trade and other commercial activities in the bandh calls. FAPCCI also appeals all the concerned that they advise their volunteers and other concerned not to disturb the normal functioning of industry and trade nor forcibly close the factories, nor cause damage to the property and personnel.

FAPCCI also appeals to the Government to take such appropriate measures as are required, so that the Industry, Trade and other commercial activities are not unduly affected in their orderly functioning and cause loss to the economy and exchequer.

FAPCCI earnestly requests the concerned people to leave industry and trade out of the ambit of bandh calls and protect the interests of the common man, employees, industry and over all image of the State as preferred destination for the investments.

In the same spirit, FAPCCI urges the Government to take measures that will protect the good image of the State as preferred destination for investments as well as the orderly functioning of the trade and industry without disruption interruption, and stoppage of work. This will go a long way in arresting the slowing down the economic momentum of the State and project the good image of the Governance.