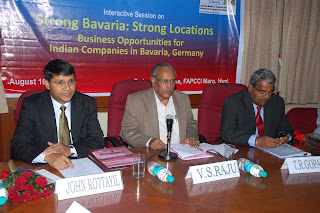 Mr. John Kottayil said in his Chief Guest address is that the Bavaria, with its gross domestic product (GDP) of 430 billion Euro, occupies 9th position of the 27 member-countries of the EU. The per-capita GDP of 34.397 Euro is significantly higher than the German or European average. Bavaria is amongst the markets with the highest purchasing power in the world. International comparative studies certify the outstanding quality of life in Bavaria, where especially the metropolitan regions of Munich and Nurnberg top the lists again and again.

Mr John explained the Indo-Bavarian relations are in excellent shape and can look back on a tradition extending over more than 500 years. After the sea route was discovered in 1497/98 by the Portuguese explorer Vasco da Gama, it was some Bavarian merchants and trading houses, which fitted out the first expedition to India 1505. This was the beginning of overseas trade with India and of a thriving period in Indo-Bavarian trade relations.

Bavarian-Indian trade stood at about 2 billion Euros. India is now the number 4 among Bavaria most important trading partners in Asia. Altogether over 1,000 Bavarian companies already maintain business relations with India. More of 350 of them have representative offices and branch offices or production plants of their own in India. So far, over 65 Indian companies have set up operations in Bavaria. 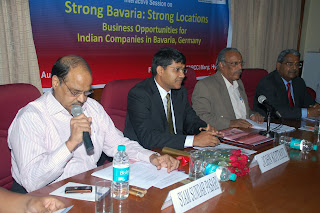 Mr. V.S. Raju said in his welcome address is that the Andhra Pradesh has emerged as a key state for the knowledge-based industry including IT, pharmaceuticals and biotechnology. The state has a large base of skilled labour, making it an ideal destination for the knowledge sectors. Further, the state has a large pool of semi-skilled and unskilled labour, especially, in the 15 to 49 age group. The State is Ranked 2nd in the country in attracting investments. The booming Andhra Pradesh economy has a lot to offer for foreign investors, foreign institutional investors, venture capitalists, and portfolio managers etc. to leverage vast pool of natural, human and intellectual resources of Andhra Pradesh, apart from various attractive investment opportunities.

Mr. Raju also said as both of Indo-Bavarian systems are based upon individual business initiative and entrepreneurship and upon the stability ensuing from rule by democracy and law, Bavarian and Indian communities experience a great deal of familiarity and a high level of comfort when doing business in and with each other. I am sure, this meeting will give an opportunity the businessmen to know the development taken place in Bavaria, Germany and the scope of establishing business co-operation, joint-ventures, technology import and/or making investment in Bavaria, Germany.

Mr. Shyam Sunder Parasi requested for a Bavarian Help Desk may be set up at FAPCCI, for disseminating or exchange of trade related information, for furthering the trade between the two States.