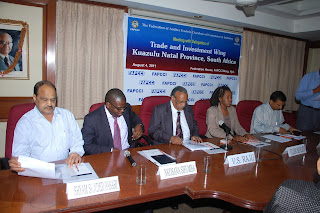 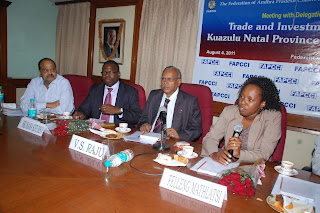 Mr Nkosana Sifumba, invited the investments to invest in Tourism, Infrastructure and Manufacturing sectors in Kwazulu Natal Province in South Africa. He said about the province is that the -Kwazulu Natal Province is a rapidly growing area and is by most attractive business and tourism destination in Africa. Sugar refining is Kwazulu capital town Durban's main industry. Sheep, cattle, airy, citrus fruits, corn, sorghum, cotton, bananas, and pineapples are also raised. There is an embryonic KwaZulu-Natal wine industry. Other industries include textile, clothing, chemicals, rubber, fertiliser, paper, vehicle assembly and food-processing plants, tanneries, and oil refineries. There are large aluminium-smelting plants at Richards Bay, on the north coast. Kwazulu Natal Province is the best destination for FDI’s he said. 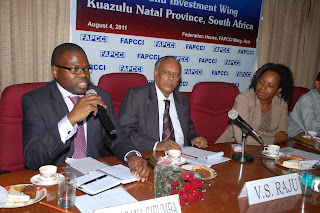 Mr. VS Raju said in his welcome address is that the According to the Reserve Bank of India, the Andhra Pradesh state’s FDI inflows from April 2000 to April 2011 amounted to US$ 6.09 billion. Andhra Pradesh is ranked at 6th position in the country. The state has had a healthy FDI inflow over the years, primarily, in sectors related to IT and IT Enabled Services, Automotive, Engineering and Electronics. Of the total outstanding investments of US$ 146.1 billion as of March 2010, Andhra Pradesh had a well balanced distribution by sectors with manufacturing, electricity, services, irrigation and construction sharing project investments of about 16 per cent to 32 per cent each. 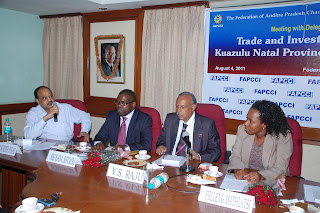 Mr. Raju also said that the Andhra Pradesh has emerged as a key state for the knowledge-based industry including IT, pharmaceuticals and biotechnology. It is also a leading agricultural state in the country. Seventy one of the 500 top global corporations are present in the state. The state offers a wide range of fiscal and policy incentives for businesses under the Industrial Investment Promotion Policy, 2010-15. Additionally, the state has well drafted sector-specific policies. The state has a large base of skilled labour, making it an ideal destination for the knowledge sectors. Further, the state has a large pool of semi-skilled and unskilled labour, especially, in the 15 to 49 age group. The GSDP of the state was US$ 85.8 billion in 2009-2010 and is growing at compound annual growth rate of 12 per cent annually. This growth was primarily driven by the service sector and was supported by primary and secondary sectors.