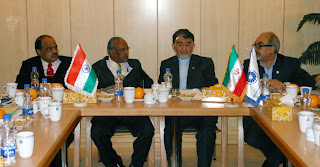 A delegation of FAPCCI members representing various business areas like civil construction, refractory’s, shipping & metal processing, engineering technologies, automobiles, legal consulting, financial consultancy, language learning technologies, chartered accountants etc., visited Iran to attend a two day international seminar on Investment Opportunities in Iran, held at Tehran during 23-24th Nov -2011. The seminar was organized by the Organization for Investment, Economic and Technical Assistance in Iran in co-operation with the Euro Convention Association from Belgium. The FAPCCI delegation left Hyderabad for Tehran on 22nd Nov-2011 and returned on 27th Nov-2011. It is heartening to note that FAPCCI delegation was the biggest delegation from India having varied portfolios of business interests and rich experience in their respective fields. 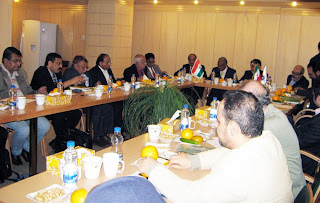 The seminar was inaugurated by His Excellency Mahmoud Ahmadinejad President of Islamic republic of Iran and was attended by more than 1000 delegates. During the opening session the ministers representing petroleum, Industry, Mines, Trade, Foreign affairs, Power, Transportation, Urban-Infrastructure, Economic Affairs, Finance & Commerce, Portfolios addressed, highlighting the business potential in Iran for foreign investment in respective portfolios.

During the afternoon Exclusive technical sessions were held focusing on oil, gas and petro chemicals, mining and industry, agricultural and fisheries, tourism and free zones wherein the CEO’s of concerned departments of Govt of Iran made elaborate presentations highlighting business opportunities.

During the second day technical sessions in the areas of Banking and Insurance, Privatization of capital market, power and renewable energy, transportation and urban constructions were held, with detailed presentations. In the afternoon B2 meetings were held during which the delegates from various countries had one to one meetings with their counter parts from Iran, had extensive discussions to work out business avenues and modalities for business tie-ups. 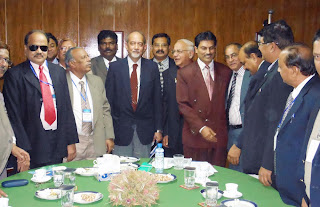 During the visit the FAPCCI delegation had significant meetings with Tehran Chambers of Commerce, Industries and Mines, Embassy of India in Iran and Vice Minister & President of Organization for Investment, Economic & Technical Assistance of Iran (OIETAI).

FAPCCI delegation had a meeting with the members of Tehran Chambers of Commerce, Industries and Mines (TCCIM) on 22nd Nov- 2011 evening at Chambers office. From TCCIM, Dr. Yahya Ale-es-hagh, President, Mr Ali Akbar Javidan, Deputy Secretary General & Head of International Affairs, Mr Massoud Maleki, Director of Asia & Oceania International Dept., Mr Hosseom Nozzari, Director of Protocol & Logestics International Dept, Mr Hedayatollah Rezaei, The Head of Europe-America Dept. of Int’l Affairs and senior officials representing various business portfolios were present. On behalf of FAPCCI delegation, Shri V.S. Raju, President FAPCCI and the leader of the delegation, during his address highlighted the close cultural affinities between India and Iran and also the existing trade and business relations between the two countries. He also elaborated the developments in the State of Andhra Pradesh and its strengths in areas like Information Technology, Pharmaceuticals, Automobiles, Engineering & Electronics etc. He has also mentioned about other supporting facilities like Industrial Infrastructure, virtual connectivity, the most modern airport and ports infrastructure in the state etc. which are pre requisites for any foreign investment. Later each member of the delegation briefly introduced his personal profile, areas of business interest and competencies. The members of TCCIM also reciprocated the same. The meeting was ended with high appreciation from the president of TCCIM, for participating in the summit and expressed the hope for stronger bilateral trade between India and Iran in the future.

On 24th Nov-2011 evening FAPCCI delegation had an elaborate meeting at Embassy of India. Initially Shri Bharat Babu, Counselor Embassy of India interacted with FAPCCI delegates and enquired about their one to one interactive meetings with their counter parts in Iran during the summit and also the business development potential. Later His Excellency Sri D.P. Srivastava, Ambassador of India to Islamic Republic of Iran, addressed the FAPCCI delegates elaborating on present socio-economic and industrial scenario in Iran and guided the delegates as to how to proceed further for business promotion in Iran and also for encouraging business investment by the Iranians in State of Andhra Pradesh. The meeting was highly informative and all the delegates conveyed their appreciation and also sincere thanks to the Ambassador and counselor, and Indian Embassy.

The President & Dy Secretary General of FAPCCI had an exclusive meeting with His Excellency Behrouz Alishiri, Vice Minister & President, Mr Sadegh Akbari, Director General of Foreign Economic Relations of Organization for Investment, Economic & Technical Assistance of Iran (OIETAI) in the fore-noon of 24th Nov-2011, wherein the President FAPCCI has given a brief account of business potential and the scope for Foreign Investment In the State of Andhra Pradesh.

The members of FAPCCI may glad to know that business dialogue is in progress in areas like urban construction, mining, cement, automobiles, renewable energy systems, technical consultancy services for rehabilitation of highway bridges, infrastructure facilities etc, between FAPCCI delegates and Iranian counter parts, are likely to progress further.

The FAPCCI delegation to Iran was co-ordinated by Sri A.S. Kumar, DSG, FAPCCI.