Panama invites investments to Agri-Biotech, Pharma and IT sectors 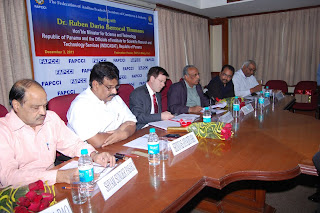 The Federation of Andhra Pradesh Chambers of Commerce and Industry (FAPCCI) in association with The Ministry of Science & Technology, Republic of Panama the bilateral trade meeting on “Indo-Panama Trade and Technical Relations” on 3rd December 2011 at J.S.K. Hall, Red Hills, Hyderabad. Dr. Ruben Dario Berrocal Timmons, Minister for Science & Technology, Republic of Panama was the chief guest for the occasion. 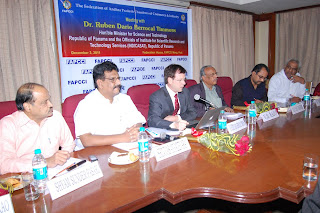 Dr. Ruben Dario Berrocal Timmons in his inaugural invited Indian investments to Panama to invest in Logistics, Tourism, Agriculture, Financial Services, Science and Technology, Pharma and Agri-Biotech sectors. He said that the Panama’s main focusing on sectors like Logistics, Tourism, Agriculture, Financial Services, Science and Technology, Pharma and Agri-Biotech with the greatest potential will generate more than 500,000 new jobs over the next decade. The development plan prioritizes the stabilization of public finances. Panama aims to improve on its Investment Grade credit rating and will ensure that the level of public debt stays below 30% of GDP over the next 10 years. Significant investments in the education, health, public safety, and transportation sectors will increase the standard of living and benefit the residents of Panama. During the next five years, this investment will be primarily focused on infrastructure development that will generate jobs and stimulate growth on a path towards sustainable development.

Dr. Ruben also said that - high grow rates resulted from the reactivation of regional trade sector growing with high rated results and the last year grow rate is 16%. Port activity registered an important jump with a 27% increase. Container movement expanded 32% while air transport grew 16% in 2010. Panama also has become the main cruise terminal in Latin-American. The Panama’s infrastructure network connecting the main centers of production taking advantage of the country’s geographic position. The Panama Canal is the main international trade engine. Over 14,000 vessels transit this waterway each year, 300 million tons through more than 120 routes with 210 million tons of cargo in 2010 alone. 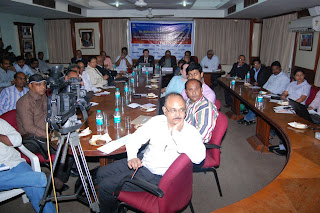 Mr. V.S. Raju in his welcome address complimented the Institute for Scientific Research and High Technology Services –AIP, for being one of the premier institute with the most complete infrastructure in Panama for scientific research in the fields of Biomedicine, Biology, Biotechnology, Chemistry of Natural Products, Pharmacology, Biodiversity, Immunology, Neurosciences, Toxicology, Parasitology, Clinical Trials and other related areas. Panama is the first country in Central America where India has a resident Mission. Panama also has a Mission in New Delhi. Panama is one of the key countries in Latin America and Indian businessmen should explore this market more vigorously. Already a large number of Indian businessmen present in Panama engaged in wholesale and retail activities. There is lot of scope for Indian businessmen in various sectors including engineering, construction and hydro power.

Mr. Shyam Sunder Pasari in his introductory remarks said that India’s main exports to Panama are apparel and clothing accessories, rubber and its articles, electrical machinery and equipment, articles of iron and steel products, tobacco items, etc. On the other hand, India imports mineral oils and products, ships, boats and floating structures, aluminum and articles from Panama. India’s exports to Panama have been increasing over the years. It amounted to US$63 million in 2005-06 and increased to US$123 million in 2008-09 before declining to US$78 million in 2009-10.