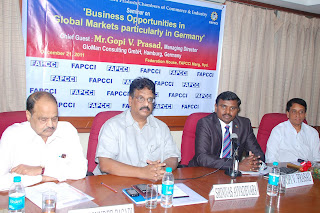 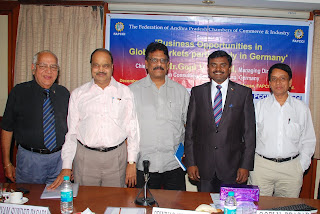 Mr. Gopi V. Prasad said in his key note address is that the Germany is India’s largest trading partner in Europe. Indo-German bilateral trade has registered an increase of 17.08% to reach Euro 15.44 billion during 2010. Indian exports grew over 21.46% over the same period of 2009 to reach Euro 6.19 billion, while its imports registered an increase of over 14.32% to reach Euro 9.25 billion. The trade surplus is in favor of Germany of about Euro 3.07 billion. Both countries are confident that the target of achieving bilateral trade of Euro 20 billion by 2012 can be met. India ranks at the 28th position amongst trading partners for Germany worldwide. India accounts for 0.7% of total German trade and ranks 5th among Asian exporters to Germany. Germany is also the 8th most important destination for Indian exports. While major items of exports from India to Germany are cotton and textile products, leather and leather products, chemicals & pharmaceuticals, metal products and automobile components, the key imports in India from Germany include machinery, electro-technical goods, aircrafts, metal goods, chemicals, measurement and control systems, synthetic materials etc. Cooperation in the field of Information Technology, Biotechnology, Auto Components, Renewable Energy and the Entertainment Industry is also increasing.

German investments in India have shown a steep increase in the past three years. Germany was the 8th largest investor in India, with cumulative FDI from Germany during the period August 1991 to February 2011 amounting to US$ 3.83 billion. Sectors such as services, chemicals, automobiles, trading and electric equipment were main sectors for German investment. Germany's leading news magazine Der Spiegel has cited India as the No.1 destination for offshore development by German software companies. Indian investment in Germany has also increased in recent years. The IT sector continues to be the best represented in terms of foreign direct investment Mr. Prasad said.

He said that according to FDI Markets, India has initiated 40 projects in Germany since 2003, 20 of which are in the software and IT sectors. Indian companies either acquiring firms or starting their own subsidiaries in Germany include Ranbaxy, Samtel, NIIT, Wockhardt, Graphite India Limited, Megasoft, Torrent Pharmaceutical, Dr. Reddy's Laboratories, Tata Auto Component Systems, Mahindra & Mahindra etc. Indian companies in Germany employ nearly 24,000 people, most of whom are German nationals, thereby adding to the job opportunities in Germany.

Mr. Srinivas Ayyadevara said in his welcome address is that the Indo-German cooperation in the field of trade and economics is one of the most dynamic facets of the bilateral partnership. The Joint Commission on Industrial and Economic Cooperation led by the Finance Minister from the Indian side and the Economics Minister from the German side meets regularly. In addition, there are seven Joint Working Groups, namely, on agriculture, automobile, infrastructure, energy, coal, tourism and vocational education which focus on furthering collaboration in specific sectors. The Indo-German Energy Forum deals with renewable energy, energy efficient technologies, power sector, alternative fuels and CDMs. Around 4500 Indian students are pursuing various courses in Germany, while around 800 German students are studying or doing their internships in India. Many Indian students are opting for Engineering and Management courses in German Universities on a self-financed basis. Some German companies like Siemens and Bosch offer scholarships for Indian students to undertake postgraduate courses in German universities under the DAAD programs. Thus, there is a scope for further cooperation in this sector.

There are about 68,000 Indians in Germany. Of these, about forty thousand hold Indian passports, while the rest have acquired German citizenship over the years. The Indian diaspora mainly comprises of technocrats, small time businessmen/traders and nurses. There are a number of Indian organizations and associations active on the business/cultural front, cementing ties between India and Germany at the people-to-people level Mr. Srinivas said.

Mr. Syam Sunder Pasari said that the Germany is the most populous country in Europe and contributes to 23 % of the EU budget. It is India’s biggest trading partner in Europe and the 5th biggest trading partner in the world. Germany is also India’s second largest technology partner. India was amongst the first countries to recognize Federal Republic of Germany (FRG) after the Second World War. There has been a rapid growth in trade and economics with bilateral trade reaching Euro 15.44 billion in 2010. The two countries also work together in various international forums including the UN, G-4 and G-20. In 2011-12, India and Germany are both non-permanent members in the UNSC, which provides a new area for cooperation.