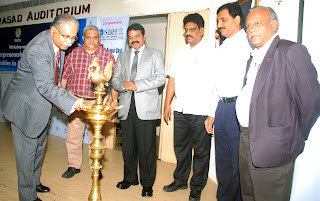 The Federation of Andhra Pradesh Chambers of Commerce and Industry (FAPCCI) in association with Dept of Animal Husbandry & Dairy Development, Govt. of AP & NABARD

Mr. S. Bhale Rao in his inaugural address stated that the dairy business is the most sustainable are in the world. India is not only a major milk producer in the world, but also the biggest exporter. Indians has exporting milk and milk products across the world. The major destinations for Indian dairy products are Bangladesh (23.1%), UAE (15.4%), US (15.6%) and Philippines (8.9%). In terms of products, SMP is the most important product accounting for about 63% of total export volume, followed by ghee and butter (11.7%) and WMP. Export figures clearly demonstrate that the Indian dairy export is still in its infancy and the surpluses are occasional. Indigenous milk products and desserts are becoming popular with the ethnic population spread all over the world. Therefore, the export demand for these products will increase and hence, there is a great potential for export.

He also said that minerals and nutrition based feed with green feeder is required for animals to produce quality milk. Cleanliness is most important for hygienic milk production. Israel using very advanced technology for animal healthcare.

Mr. V.S. Raju in his welcome address stated that Milk is widely considered as one of the world`s most sustained valuable protein food. As raw material, it is available for different uses and processed into an ever increasing variety of nutritional milk products viz. sweets, ice-creams etc. More than 70% of the populations live in rural areas and depend on agriculture and its allied activities predominately dairying for livelihood. Andhra Pradesh State is one of the leading state, which experimented with various new business models and encouraged large number of private sector dairies competing with each other.

Dr. M.V. Reddy said that the dairy industry is playing vital role in the world. India is the world’s largest milk producer, accounting for more than 13% of world’s total milk production. It is the world’s largest consumer of dairy products, consuming almost 100% of its own milk production. Dairy products are a major source of cheap and nutritious food to millions of people in India and the only acceptable source of animal protein for large vegetarian segment of Indian population, particularly among the landless, small and marginal farmers.

Mr. P. Mohanaiah said that the Government of India is the focal department for the scheme of Dairy Entrepreneurship Development Scheme (DEDS). The NABARD will implement the DEDS Scheme through Commercial Banks, State Cooperative Banks, SLDBs Regional Rural Banks and other agencies eligible for refinance from NABARD. The main objective of this program is To promote setting up of modern dairy farms for production of clean milk, To encourage heifer calf rearing thereby conserve good breeding stock, To bring structural changes in the unorganized sector so that initial processing of milk can be taken up at the village level itself, To bring about up gradation of quality and traditional technology to handle milk on a commercial scale and To generate self employment and provide infrastructure mainly for unorganized sector.

Mr. K. Bhaskar Reddy in his introductory remarks, explained a certain guidelines to the new dairy entrepreneurs that ample space is required for buildings, future expansion, parking of transport vehicles and for empty cans. The location of a plant should be close to the milk producing area in case of products manufacturing unit and if liquid milk is the main product it should be close to the consumer. The location of site should have proximity to road/rail facilities, service, such as water, electricity and effluent mains, social infrastructure. In respect of plant and machinery the section-wise equipment required, their specifications. Technical collaboration is required for manufacture or marketing of milk products. Infrastructure facilities are required for raw material and utilities. As far as Government Regulations concerned No license is required for setting up Dairy project in India. Only a Memorandum has to be submitted to the Secretariat for Industrial Approvals and an acknowledgement is to be obtained. However Certificate of Registration is required under the Milk and Milk Products Control Order 1992. Foreign Investment in dairying requires prior approval from the Secretariat of Industrial Approvals, Ministry of Industry, as dairying has not been included in the list of High Priority Industries. Automatic approval will be given upto 51% Foreign Investment in High Priority Industries.