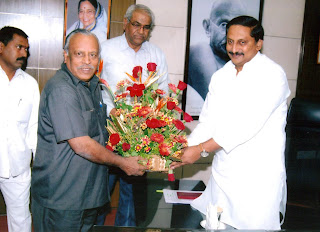 The president of FAPCCI, Sri V. S. Raju, along with Sri Devendra Surana, Sr. Vice President, Sri V. Anil Reddy, Chairman, Energy Committee, Sri Arun Kumar Dukkipati, Managing Committee Member, and Sri M. V. Rajeshwara Rao, Secretary General met the Chief Minister today. Sri Raju appraised the CM that the industry has suffered a production loss of Rs. 31,750 crore on account of 40 percent power cut it had in the last 14 weeks and that many industrial units have become sick and many are on the verge of sickness. He emphasized that it was not just the loss of production and consequent financial loss alone that is causing concern to FAPCCI but the loss of jobs, thousands and several thousands of them, is a major concern to FAPCCI. Many micro and small industrial units are in hapless condition and many medium and large industries are running into serious financial difficulties. Cumulatively the good image of Andhra Pradesh as preferred destination for investments is getting affected. 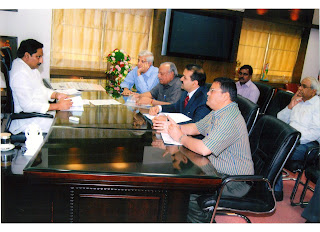 He brought to the notice of the chief Minister that in coming months of January to May the power shortage scenario is going to be further worse with shortages rising to such high levels as 20 to 40 percent. With these expected shortage of power the industry would suffer a perilous loss of Rs. 70,000 crore or more in the coming five months, adding further economic and human distress (on account of increasing job losses) in the State.

Sri Raju impressed on the Chief Minister that there is an urgent need to make all out efforts to have more power made available to the industry and save it from deceleration and decline and from virtual collapse.

Making a power point presentation Sri Surana brought to the notice of the Chief Minister that all these 14 weeks the average energy shortage was only 10 to 12 percent but the industry suffered a high power cut of 40 percent and requested the Chief Minster to see that the productive sector like industry should not be imposed a power cut more than the average power shortage. He also brought to the notice of the Chief Minister that there are lot of delays in disbursing the power subsidies, investment subsidies, and tax incentives to industry. He took up the issue of 5% vat charged to solar power sector, whereas in the States like Tamilnadu, Maharashtra, Jammu & Kashmir and Orissa there is no vat on solar power and requested the Chief Minster to look into removing the delays in disbursement of incentives and subsidies and removing of vat of 5% on the solar power sector. 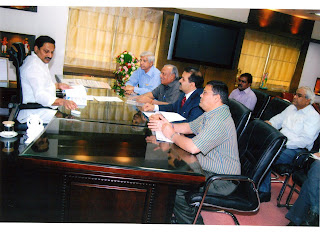 The Chief Minister was quite appreciative of the problems being faced by industry and told the delegation that it is not only in the interest of industry alone that the government needs to do all things possible to have more supply of power to industry. It is in fact in the interest of the government also it needs to do its best it is industry that gives more revenues to the exchequer. He said that he had a very high level review meeting yesterday and has given instructions to buy power. He said that two power plants are going to be restored and that the industry will be then saved from power cuts to a large extent and that from 25 December the power cut will be reduced to one day only. He assured that he would pay personal attention to review the power situation on a regular basis and assured the delegation he would give necessary instructions to ease the problem of power shortage to the industry as well as to other consumers in the State.