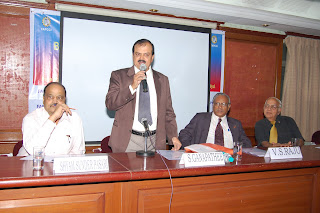 Mr. S. Ganapathee, Consultant, Panafrique said Africa, particularly West Africa is good investment destination for business operators around the world because, and it gives significant return on investment. The population of West Africa is about 300 million; closer to the population of the United States of America, and this is a big market for investors. Africans have very strong entrepreneurial spirit because its population is young and has potential for growth. The West Africa has been consistently showing an annual growth rate of almost 5%, and today the continent has an urbanization level almost as high as China, with 52 cities of more than one million people. Collective GDP in 2008, for example, was in the region of $1,600 billion; as much as Russia or Brazil. According to EFPR Global, the first half of this year has African regional funds attract inflows of over $484 million, and total investment fund allocation to African countries was a record $1.39 billion. The West African Monetary Board -Ghana, Gambia, Guinea, Nigeria, Sierra Leone and Liberia, they are all democratic governments and they always welcoming the investors to invest in Tourism, Mining, Infrastructure and many other sectors.

Mr. V.S. Raju said in his welcome address is that the Indo-West Africa relations have traditionally been warm and friendly. The year 2010 has been an eventful year for India-Africa Relations at bilateral, regional and multilateral levels. India has undertaken a series of important initiatives as also institutional framework to create an enabling trade and business environment to facilitate and enhance bilateral and commercial trade with the African countries. The key programs guiding these initiatives include Focus Africa program, India Brazil South Africa Trilateral Commission, Techno-Economic Approach for Africa India Movement, India-Africa Project Partnership Conclaves, etc.

India’s relations with the countries of West Africa continued to grow during 2010, with several important visits and meetings on the sidelines of international multilateral conferences. The Ministry’s flagship project of Pan-African e-Network was implemented in 12 more countries during the year, thus taking total number of African countries coming under the loop to 43. Several Lines of Credit were extended and grant-in-aid given to the West African countries for development of infrastructure and also to help in rehabilitation process following natural disasters. India-West Africa trade during the year 2009-2010 was US$18.04 billion, an increase of 9.7% over the previous year Mr. Raju said.

Mr. Syam Sunder Pasari said that the West Africa possesses a rich resource base, especially oil and mineral resources, which can be exploited to enhance regional integration and growth.