France is the seventh-biggest foreign investor in India 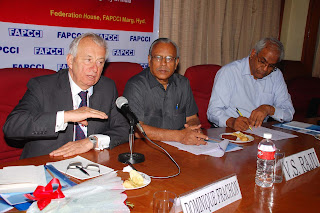 The Federation of Andhra Pradesh Chambers of Commerce and Industry (FAPCCI) in association with Investment in France Agency in India organized Interactive Meeting on “India-France Bilateral Trade” on 15th March 2013 at Federation House, Red Hills, Hyderabad. Mr. Dominique Frachon, Managing Director and Head of Investment in France Agency in India were the chief guest for this occasion. Mr. V.S. Raju, President, FAPCCI and Mr. M.V. Rajeshwara Rao, Secretary General are the other speakers at the occasion.

Mr. Dominique Frachon said in his key note address is that the France is the seventh-biggest foreign investor in India with approximately USD 750 million. More than 300 French companies established in India, employment of over 40,000 people. France holds approximately 1.7% of market share in India, making it India’s 15th supplier and 11th customer. After exceeding the one billion euro mark in 2001, French exports increased sharply in 2004 (+29%) and in 2005(+42%), for a total of nearly ¼3 billion in 2007.